That’s not a secret that Xiaomi’s POCO brand focuses on international markets. Moreover, it doesn’t spend a penny on research and development. Instead, it takes what Xiaomi creates, renames it, and launches it under its brand. Such an approach allows the company to save a lot of money and offer good smartphones at low price tags. The upcoming Poco X5 is going to be another sample of how a brand can make money with a 0 investment.

The Poco X5 will be a low-end smartphone with basic functions but very low pricing. Today, it appeared on the GeekBench platform. 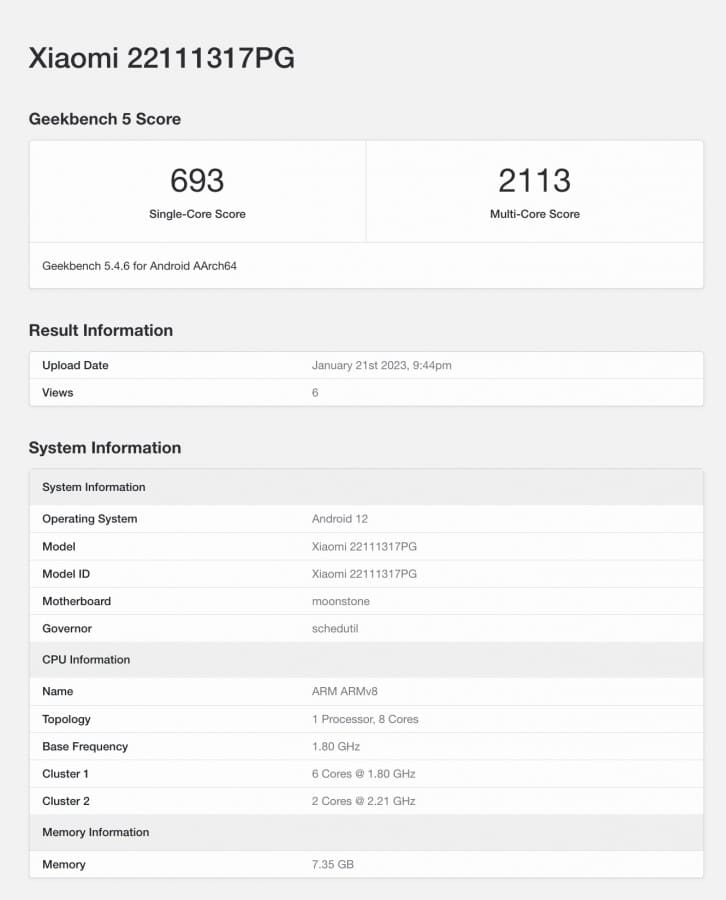 Combining processor information and the benchmark score data – two 2.21GHz large cores and six 1.8GHz small and medium cores – it should be the Snapdragon 695 chip. Plus, this version has 8GB of RAM and runs on the Android 12 operating system (MIUI 14).

Prior to this, we have heard that the Poco X5 is more like a minor facelift of the Chinese Redmi Note 12. But the Snapdragon 4 Gen 1 processor is replaced with the Snapdragon 695. The rest of the configuration remains basically unchanged.

In addition, the Poco X5 will use a 120Hz LCD screen, while the Chinese Redmi Note 12 uses Samsung’s 120Hz OLED material. In terms of other specifications, the handset will come with a 5000mAh large-capacity battery supporting up to 33W; the dual camera on the back will include a 48-megapixel main sensor.

By the way, the Poco X5 5G is expected to be equipped with a 120Hz refresh rate LCD panel and a Snapdragon 778G Plus processor.