The Realme 10 series includes three models. The highest variant is the Realme 10 Pro+, which is a mid-range handset, but its screen has no equals on the market.

One of the biggest highlights of this phone is the world’s first 2160Hz ultra-high frequency dimming screen. The screen of Realme 10 Pro+ has reached the flagship level, and Realme customizes this curved screen for 100 million yuan ($14 million).

Realme and Tianma jointly developed the 2160Hz ultra-high frequency dimming screen of the Realme 10 series. To achieve this goal, the two teams invested a lot of time and labor costs, from the mold design of the screen to the IC chip. It took 15 months to create this screen. The display boasts low power consumption and bright content viewing.

Compared with the 480Hz low-frequency dimming used by the iPhone, the dimming frequency of the 2160Hz ultra-high frequency dimming has been increased by 4.5 times. It can preserve the accuracy of color display in low light and solve the problem of apparent low-brightness flickering.

The Pro+ has been specially optimized for the problem of false touch on the curved screen. It comes with a new generation of self-developed X-touch anti-false touch algorithms. The anti-false touch area is 20% larger and supports dozens of gripping scene optimizations. It can cover almost all usage scenarios you can think of. The phone can effectively distinguish between regular operation and false touch.

In terms of core configuration, the Realme 10 Pro+ sports a 6.7-inch screen with a resolution of 2412×1080. There is the MediaTek Dimensity 1080 chip inside. The rear camera includes a 108MP primary lens. The 5000mAh large-capacity battery supports 67W wired flash charging. And the handset leaves the factory with Realme UI 4.0 onboard. 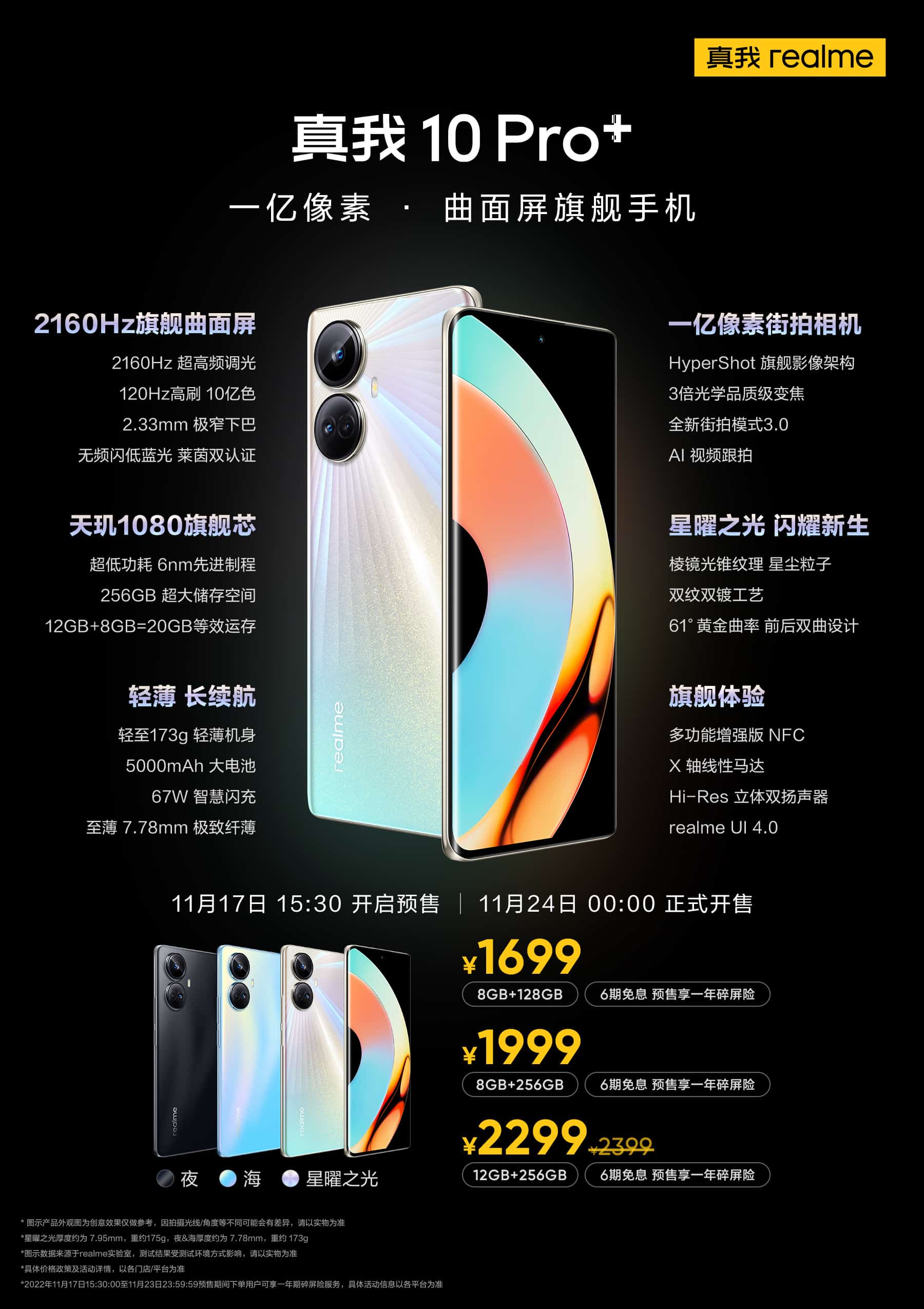 Unlike the Pro+, which uses an OLED curved screen, the Realme 10 Pro features an LCD straight screen with a 1mm ultra-narrow bezel and a screen-to-body ratio of 93.76%. Thus, it is narrower than the iPhone 14 Pro series. This is the ceiling in the narrow-bezel straight screens segment.

In addition, the Realme 10 Pro comes with Realme UI 4.0 out of the box. The system has a built-in AI engine, which reduces the attenuation of read and writes performance by 30%, increases the application cold start speed by 13%, and increases the system battery life by an average of 12%.

The processor of the handset is the Snapdragon 695 chip. 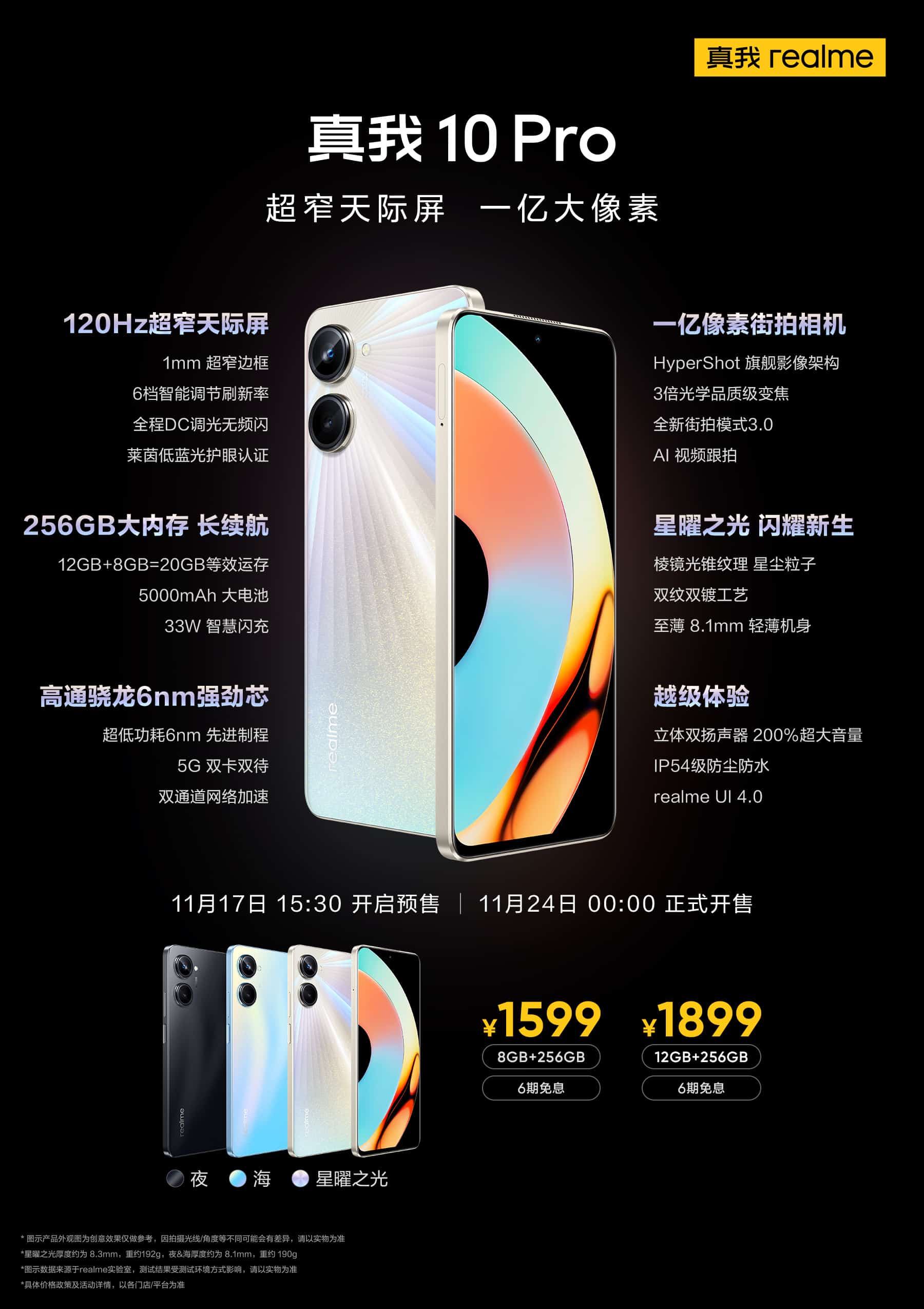 We knew that the Realme 10 opened appointments much earlier. We learned that the phone used the current mainstream water drop screen design. Under the hood, the vanilla variant hides the MediaTek Dimensity 700 processor and a storage combination of up to 8GB+256GB. The same 5000mAh battery supports only 33W charging power.

On the front, we have a 6.6-inch LCD material screen with a refresh rate of 90Hz and a resolution of 2408 × 1080. Regarding imaging, the device comes with an 8-megapixel front camera and a rear three-camera module consisting of a 50-megapixel primary lens, a portrait lens, and a macro lens.