Home News Xiaomi Mi 13 is on the way: Leaked in EEC database

Xiaomi Mi 13 is on the way: Leaked in EEC database

According to multiple sources, the next-generation Snapdragon 8 Gen 2 uses TSMC’s 4nm process. However, it will come with a different architecture. Of course, we are waiting for better performance. So the smartphone makers do as well.

Getting back to the EEC database screenshot, we can see that Xiaomi has already registered the Xiaomi Mi 13, including several models – 2210132G, 2210133G, etc. The suffix “G” stands for Global, the global version. 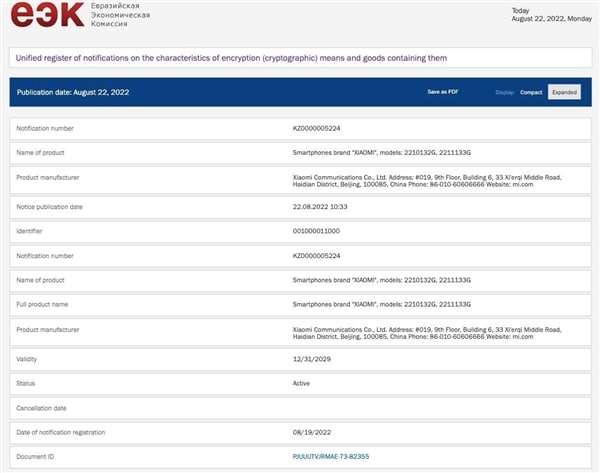 Though this leak doesn’t reveal anything but the name, from previous rumors and leaks, we have managed to learn a lot. Particularly, the Xiaomi Mi13 series will use two-screen solutions. The standard version will have a straight screen with a 1080P resolution, while the Pro version will come with a curved screen boasting a 2K resolution. Both will adopt a punch-hole screen design. Because of the new packaging process, the borders of the Xiaomi Mi 13 series will become narrower.

In terms of photography, the prototype of the Xiaomi Mi 13 series has already tested new imaging solutions. For instance, it should come with a 50-megapixel super-large bottom main camera combined with a high-pixel mid-telephoto lens.

Finally, we know that the Xiaomi Mi13 series ought to support 100W wired fast charging and 50W wireless fast charging.