For Xiaomi, probably, the most important series is the original Mi series, which is in its 12th generation now. As for Redmi, it has a well-selling series, namely Note. It’s in the 11th generation. So if the Xiaomi Mi 13 has been leaked many times, it’s logical that Redmi’s new-gen models are on the way as well. Particularly, the upcoming Redmi Note 12 has already managed to appear in the EEC database. This is a clear hint that the manufacturer will the phone in the nearest future.

Specifically, there are two models with code numbers 22101316G and 22101316UG, respectively. The suffix G stands for Global, which is the international version. So at the moment, we can confirm that the Redmi Note 12 still has a single model, which will also be launched globally. However, we can’t insist that they will come with the same name. 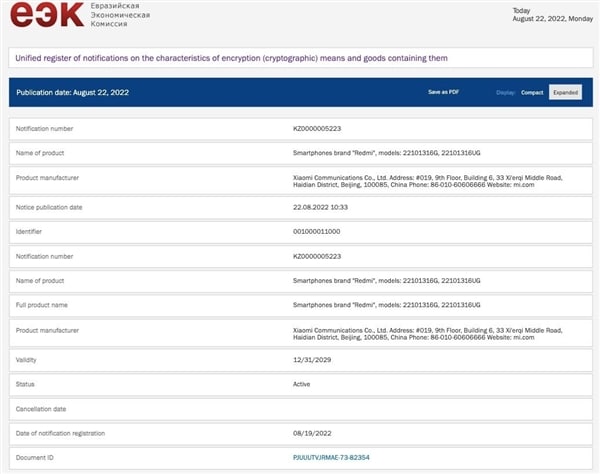 We said that currently, the Redmi Note series is in its 11th generation. But like almost all other smartphone brands, it runs a two-flagships-in-a-year strategy. This simply means the company releases one model in the first half and another in the second half. In this regard, the company has already launched the Redmi Note 11T.

By the way, the T-named series focuses on performance, while the original Redmi Note models focus on the experience, according to the company. So there is every reason to think that the upcoming model will put emphasis on the user experience rather than come with top-notch features.

Also, we’d like to say that previously, a Redmi executive hinted that the Redmi Note 11T Pro might be the last LCD screen phone. Thus, most likely, the Redmi Note 12 series will return to OLED screens and may even use the recently popular 1.5K resolution screens.

Lastly, the phone will boast of other important features, such as a camera, system, fast charging, etc.