In late July, the former-Xiaomi smartwatch brand announced a new fitness tracker, namely the Amazfit Band 7. Today, from MySmartPrice, we learned that the manufacturer would release it in India.

Though not much officially disclosed information about the upcoming smartband, a listing on Amazon India hints towards an imminent launch.

According to the listing and previous news, the Band 7 sports an AMOLED display and comes pre-loaded with more than 50 dials. Simply put, the fitness tracker might get the appearance you want. By the way, the display, considered one of the biggest selling points, is 1.47 inches. It’s a rectangular display panel around 112% bigger than its predecessor. This 2.5D AMOLED display has a 198 × 368 resolution and a 282ppi pixel density. Though there are 50 watch faces you can choose from, only 8 are editable. Interestingly, the watch supports always-on display functionality. 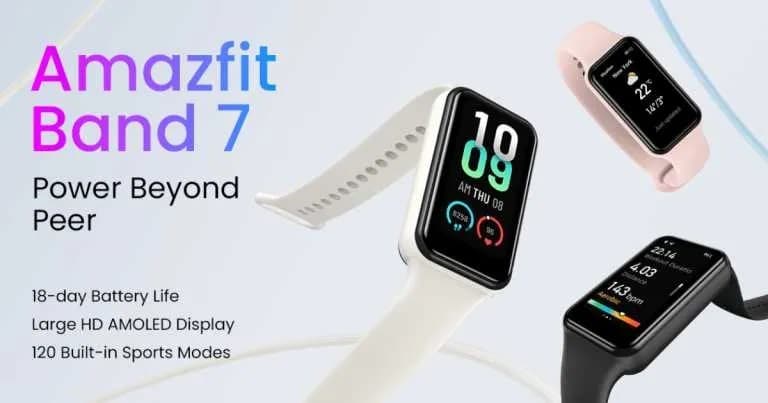 Apart from the aforementioned health monitoring modes, the fitness track also has 120 sports tracking modes. It can even auto-detect walking, running, elliptical, and row machine activities due to the company’s in-house made algorithm. Moreover, the Amazfit Band 7 comes with PeakBeats, ExerSense, and SomnusCare algorithms. This company knows how to make good smartwatches and smartbands. So that’s not accidental to know it has developed such algorithms.

Another selling point of the Amazfit Band 7 is the 232mAh battery. The latter can last for up to 18 days on a single charge. Of course, the watch can provide such numbers only when used normally. Those who are considered heavy users should know that the battery will last only 12 days. Even so, this is a pretty good result. Lastly, the Band 7 is said to offer up to 28 days of battery life in the battery saver mode.

The Amazfit Band 7 supports Bluetooth 5.2 connectivity. You can bind it with smartphones running Android 7.0 (and above) and iOS 12.0 (and above). As for its own software, the watch comes pre-loaded with Zepp OS. The latter includes 10 mini-apps.

In terms of appearance and some design elements, the fitness tracker weighs 28grams and measures 42.33 × 24.36 × 12.2mm. It supports 5ATM waterproof rating. Thus, you can immerse it in 50-meter water, and it will still operate as if nothing happened. The Amazfit Band 7 has Amazon Alexa built-in.

Of course, the Amazfit band 7 supports a removable strap design. It is available in Black, Pink, Beige, Green, Blue, and Orange color options.

According to the Amazon India listing, the Amazfit Band 7 costs $49.99. When considering its key features, the price is quite reasonable.