Home News Redmi tablet appeared in GeekBench with Snapdragon 870 onboard

Redmi tablet appeared in GeekBench with Snapdragon 870 onboard

This might be a late decision but we have what we have. Xiaomi’s sub-brand has decided to release its own tablet. But according to various market research reports, this niche is going down. So we still can’t understand why Redmi wants to enter a market that won’t be interesting to large masses very soon. Anyway, they have a decision. Moreover, it seems the Redmi tablet is ready to hit the market.

Today, a new Xiaomi device appeared in the GeekBench database with the model number 22081281AC. Through comparison and verification, we found that that’s the same Redmi tablet we have been talking about before. This 5G tablet will become the first tablet product of the company. 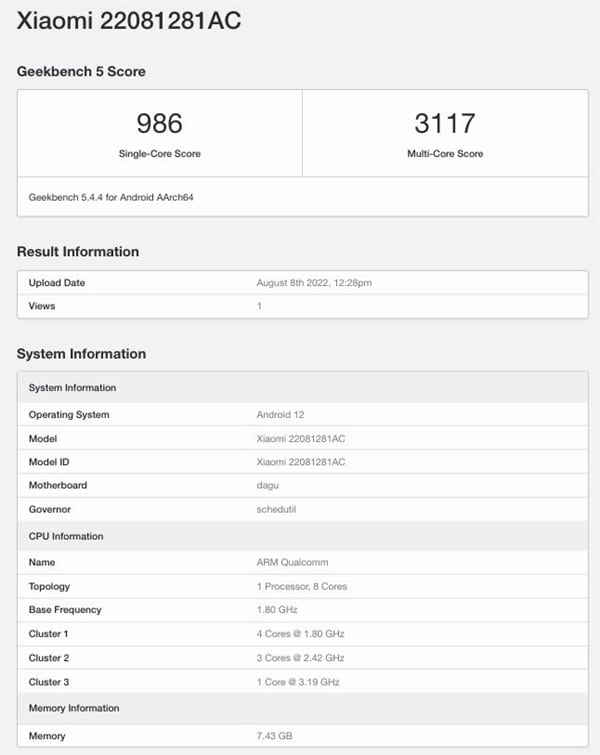 Under the hood, the tablet will host the Snapdragon 870 chip. So there is every reason to think that it will be consistent with the Xiaomi Mi Pad 5.

As for the rest of the features that we can get from the GeekBench screenshot, our protagonist will run the MIUI 13 system based on Android 12, it will sport 8GB RAM, etc.

In the GeekBench single-core test, it scored 886 points and in the multi-core test, it achieved 3117 points. This is a regular Snapdragon 870 result.

Prior to this, we learned that the Redmi tablet will have a 10.6-inch 2000×1200 resolution LCD screen. At the same time, its battery capacity will be up to 7800mAh. Apart from supporting wireless connectivity, there will be support for cellular networks, that is, 5G networks.

Generally, the Redmi tablet ought to focus on audio and video, online courses, etc. It should be more practical for education, daily entertainment, etc. So the price should be very competitive. For those who are looking for a cost-effective tablet with modest specs and coming our way from a top brand, the Redmi tablet should be a very good option.