Meizu 20 with Snapdragon 8 Gen 2 is reportedly in works

Do you remember the last smartphone by Meizu? Was it the Meizu 18, or even this version didn’t go on sale? Anyway, if you have already buried this brand, do not hurry. Today, TechGoing reported that a new Meizu smartphone had appeared on the GeekBench benchmarking platform. The alleged Meizu 20 is assumed to use a Snapdragon 8 Gen 2 flagship chip. So there is every reason to think that this brand is back and will compete with the bigwigs in the niche.

The alleged Meizu 20 appeared on GeekBench with the M2392 model number. The Qualcomm chipset inside has a codename, “Kalama.” According to the CPU section, it has one master core clocked at 3.19GHz, three operating at 2.02GHz, and four working at 2.80GHz. The SoC also integrates the Adreno 740 GPU. In other words, this is the Snapdragon 8 Gen 2 because all parameters match. From the screenshot, we can also see that the phone runs on Android 13 and has 12GB of RAM onboard.

As for the benchmark scores, in the single-core test, the phone scored 1409 points, reaching 4199 points in the multi-core test. 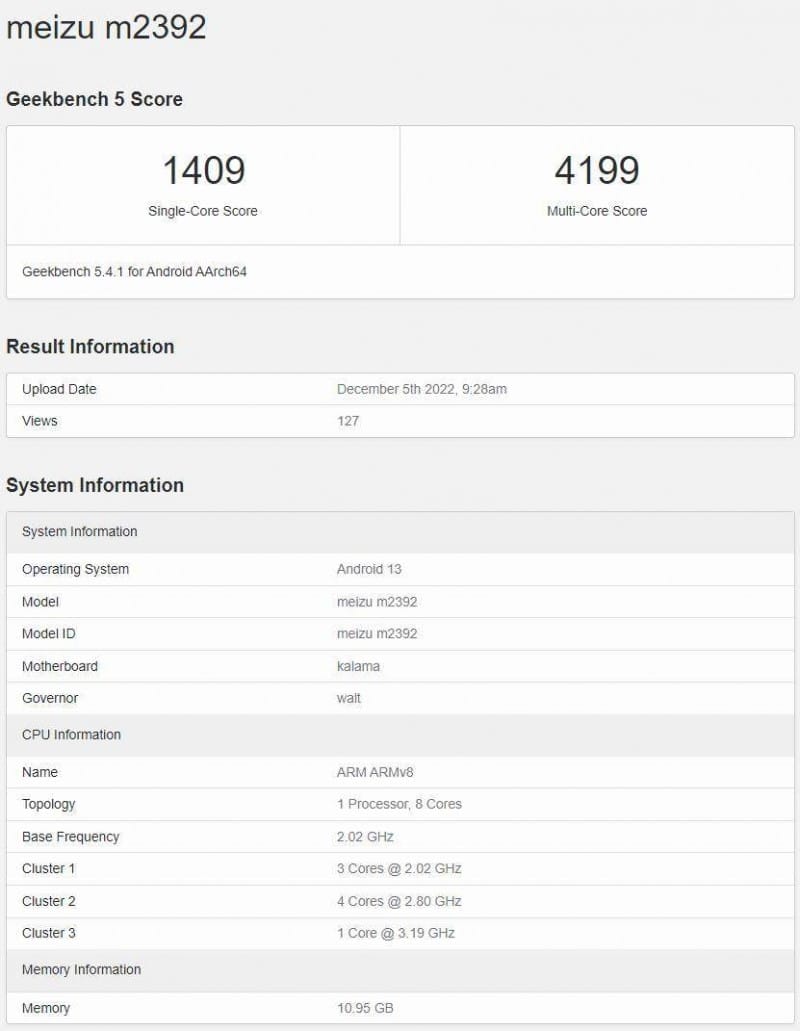 If our memory serves well, we heard that Meizu would skip the Meizu 19 moniker for its upcoming flagship phones a month ago. At the same time, the rumors claimed that the company would launch the Meizu 20 and Pro smartphones. Though there was no official statement, the source revealed some info concerning the model numbers and configurations.

Lastly, from that report, we learned that the Meizu 20 and 20 Pro would sport the Snapdragon 8 Gen 2 chip. Among them, the Pro version should come in 8GB RAM + 256GB storage and 12GB RAM + 512GB storage variants.