Home News iQOO 11 will have the strongest hardware configuration

iQOO 11 will have the strongest hardware configuration

The iQOO 11 will be a true beast, coming with tons of innovations and becoming one of the most powerful smartphones on Earth. Today, the company disclosed that three major hardware specs would include the Snapdragon 8 Gen 2 flagship chip, UFS 4.0 native storage, and LPDDR5X memory.

As the official poster shows, compared with the Snapdragon 8 Gen 1, the Snapdragon 8 Gen 2 uses TSMC’s 4nm process. The latter allows the chip to provide a 35% better performance. Compared with the iQOO 10, the sequential reading speed of UFS 4.0 is increased by 100%. UFS 4.0 flash memory is a new standard for mobile flash memory released in August. Thanks to the high-speed serial interface and optimized protocol, the interface bandwidth doubles to 23.2Gbps. The latter brings a maximum read and write speed of 4.2GB/s, and the sequential read speed is improved by 100%. Lastly, the energy consumption ratio increased by 46%.

The speed of LPDDR5X is 33% faster, and the frequency reaches 8533Mbps. We should also note that the iQOO 11 version with the 8GB+128GB configuration uses the UFS 3.1 storage technology. 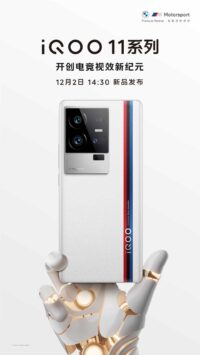 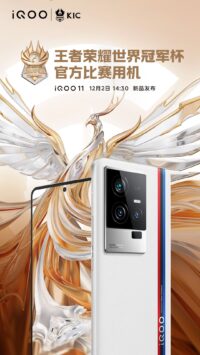 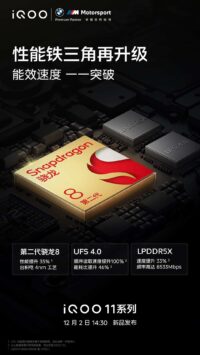 We know that VIVO’s sub-brand will host a new product launch conference on December 2. At the event, the company will introduce the iQOO 11 series and the iQOO Neo7 SE dark-horse flagship.

Not that long ago, a VIVO phone with model number V2243A appeared on GeekBench. There is every reason to think that the phone is the upcoming iQOO 11 model. Its benchmark scores include a single-core score of 1451 points and a multi-core running score of 4681 points, while the super-large core frequency is 3.19GHz. The device comes with the Android 13 operating system out of the box.

In addition, the iQOO 11 series will also use a 2K 144Hz E6 screen. The lineup should support up to 200W wired flash charging and comes with VIVO’s self-developed chip V2.