Top 5 laser projectors you should buy in September 2022

The best laser projectors in September 2022

It’s also been half a dozen years since laser projectors have begun replacing conventional TVs. Xiaomi has been one of the first manufacturers that could make products from this category that are affordable to large masses. So that’s logical that there are many Xiaomi eco chain companies specializing in smart projectors.

The list of the best laser projectors we are going to talk about today includes mainly projectors from brands that are somehow related to Xiaomi. But this shouldn’t cause any doubts because we have chosen the best models for September 2022. When saying “the best models”, we take into consideration several factors/features/functions. Among them, we should mention the brightness, the maximum image size, the bulb life span, and various technologies used for the best color reproduction. These so-called “auto-” features help interact with the projectors more efficiently, etc. 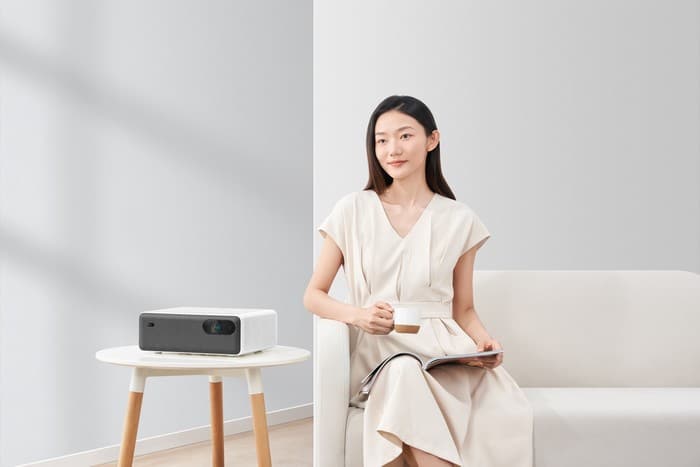 One of the most significant selling points of the Xiaomi Laser Projector 1S is the ALPD cinema homologous laser display technology. Due to it, the product provides a much better light effect, picture quality, and color. In general, the projector has fully upgraded its optical performance, with functions such as “omnidirectional automatic correction,” “non-perceptual focus,” “smart obstacle avoidance,” and “automatic curtain alignment.” They all make the use of the projector easier.

When buying a new laser projector, we must pay attention to the brightness. As for the Xiaomi Laser Projector 1S, it reaches 2400 ANSI lumens of brightness. Simply put, it can provide a clear picture during the day without pulling the curtains. 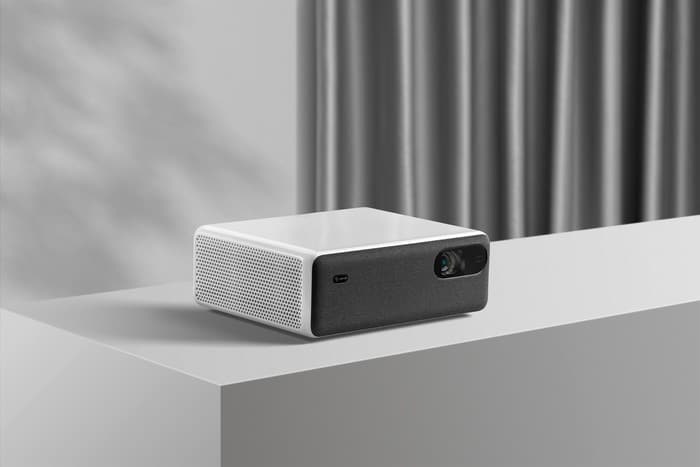 The 0.47-inch DMD chip has a 1080P native resolution, which can show more picture details.  Compared with the previous generation of Mijia products, it also adds the MEMC motion compensation function, which solves the problems of screen trailing, jitter, and ghosting. At the same time, the AI ​​PQ intelligent algorithm can automatically optimize the color, sharpness, and noise reduction according to the picture scene through massive data training.

Under the hood, we have the Amlogic T982 quad-core chip with flagship A55 cores. Its highest frequency is 1.9GHz, supercomputing power up to 2.6 trillion times per second, and strong image processing capabilities. Compared with the Amlogic T972 chip, the performance is improved by 100%. The processor is also accompanied by 2GB of RAM and 16GB of storage.

In terms of interface, there is an HDMI2.1 high-speed interface, of which the game delay is as low as 40ms.

The Xiaomi Laser Projector 1S comes with four susceptible microphones, supports far-field voice, and can be connected to the Mijia intelligent home system. At the same time, the product has a variety of built-in brightness modes to adjust at will. This projector has passed the SGS low blue light certification, effectively reducing the brightness in the range of 415nm-455nm. 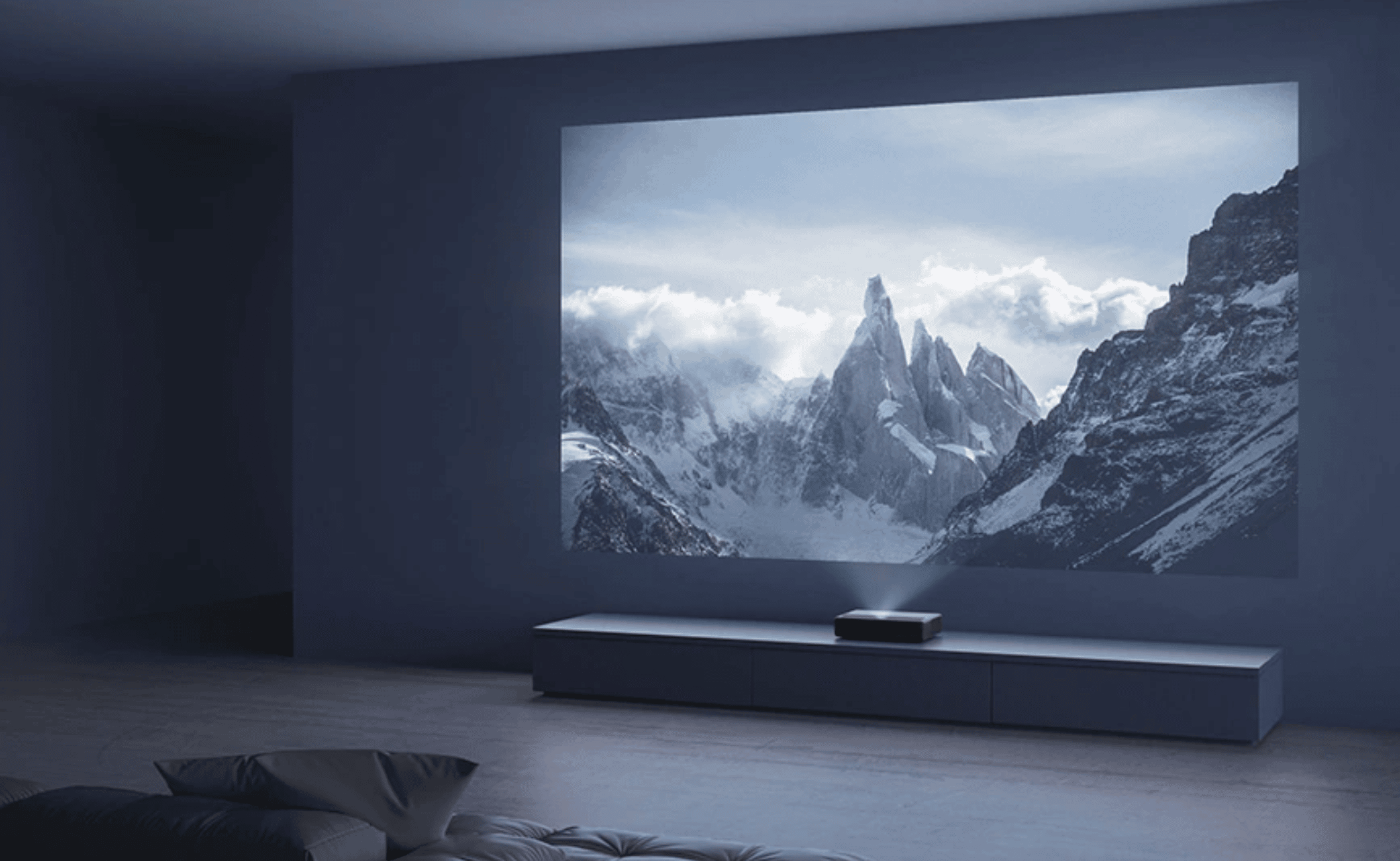 A Xiaomi-related company, Fengmi, manufactures the Wemax One. Yes, this is the same brand that has been producing laser projectors for Xiaomi. But it has decided to bring in its product, namely the Wemax One.

By the way, the projector has two variants – a basic version and a professional version. The one we are talking about is the professional variant, which usually comes with an anti-glare projector screen.

In fact, this product has many things in common with the original Mi Laser Projector in terms of design and most of the features. But in some aspects, the Wemax One stands out. For instance, instead of 5000 Lumens of brightness, the light source brightness on the Wemax One can reach up to 7000 lumens. This is of theater screen level. The actual display brightness is 1688 ANSI Lumens.

Like many other Xiaomi laser projectors, this one uses an advanced laser fluorescence display technology (ALPD 3.0) with a life span of 25,000 hours. Simply put, you can use it for 34 years usage if the projector is used for 2 hours daily.

This product boasts of two core technologies – the light source technology and the imaging technology chip designed by Texas Instruments.

The processor inside is the Amlogic T968 quad-core chip with Cortex-A53 cores at 1.8GHz. It is paired with 2GB of RAM and 16GB of native storage. It runs on Android 6.0 with MIUI TV.

On the back, we can find various interfaces placed horizontally next to each other. They include two HDMI 2.0, USB 3.0 ports, USB 2.0 ports, ARC, audio output, two SPDIF ports, and an Ethernet port. Apart from the wired connectivity options, the projector also supports WiFi (2.4 + 5 GHz) and Bluetooth 4.0.

Check out Wemax One deals 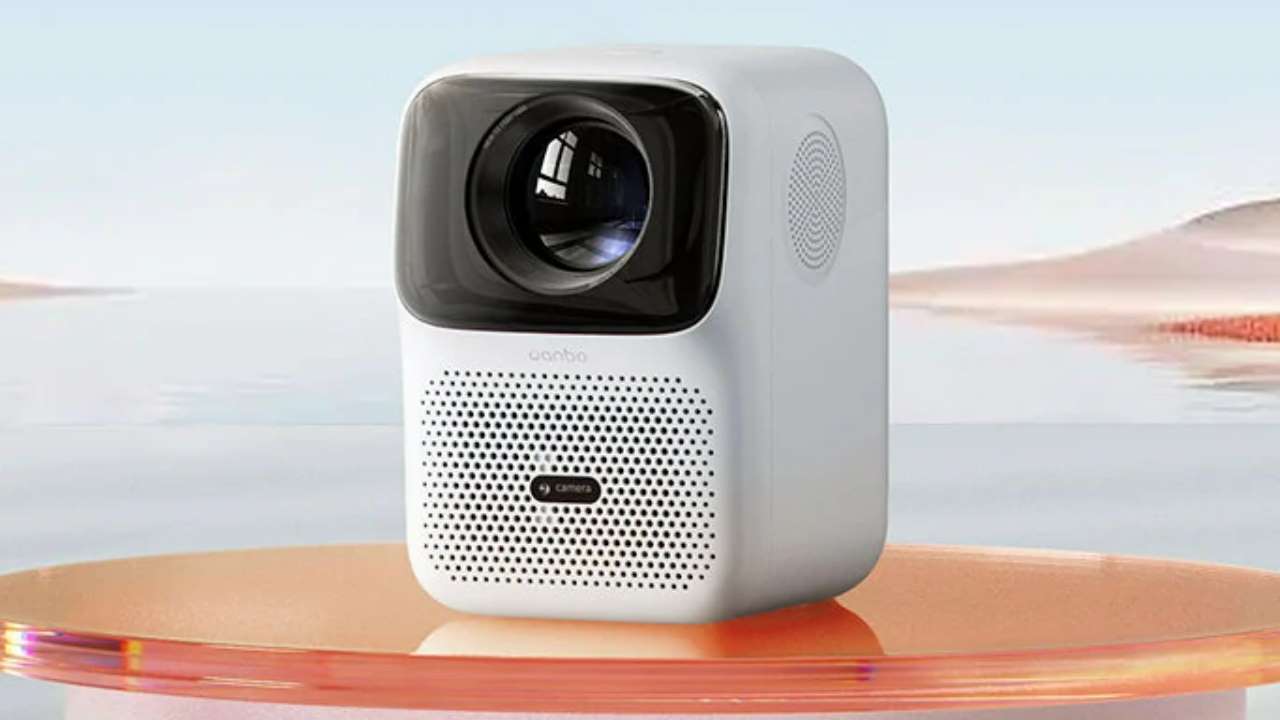 This is a compact-size portable projector coming with a few selling points. It has 127 x 150 x 185 mm dimensions, while the weight remains 1.1 Kg. However, its improvements are obvious compared with the previous Wanbo T2 Max. For instance, this product supports up to 100” image projection with an FHD resolution, a brightness of 450 ANSI Lumens, and a maximum contrast of 10000:1. It still supports automatic focus control and trapezoidal correction.

There is a pair of 3W speakers that can be used separately via Bluetooth. The included cooling system promises a noise of less than 30db.

Under the hood, our protagonist comes with the quad-core Mediatek MT9269 chip, which includes ARM Cortex-A53 cores and an ARM Mali-G31 MP2 GPU. It is paired with 1GB of DDR4 RAM and 16GB of eMMc native storage. As for software, it runs Android 9.0.

Check out Wanbo One deal 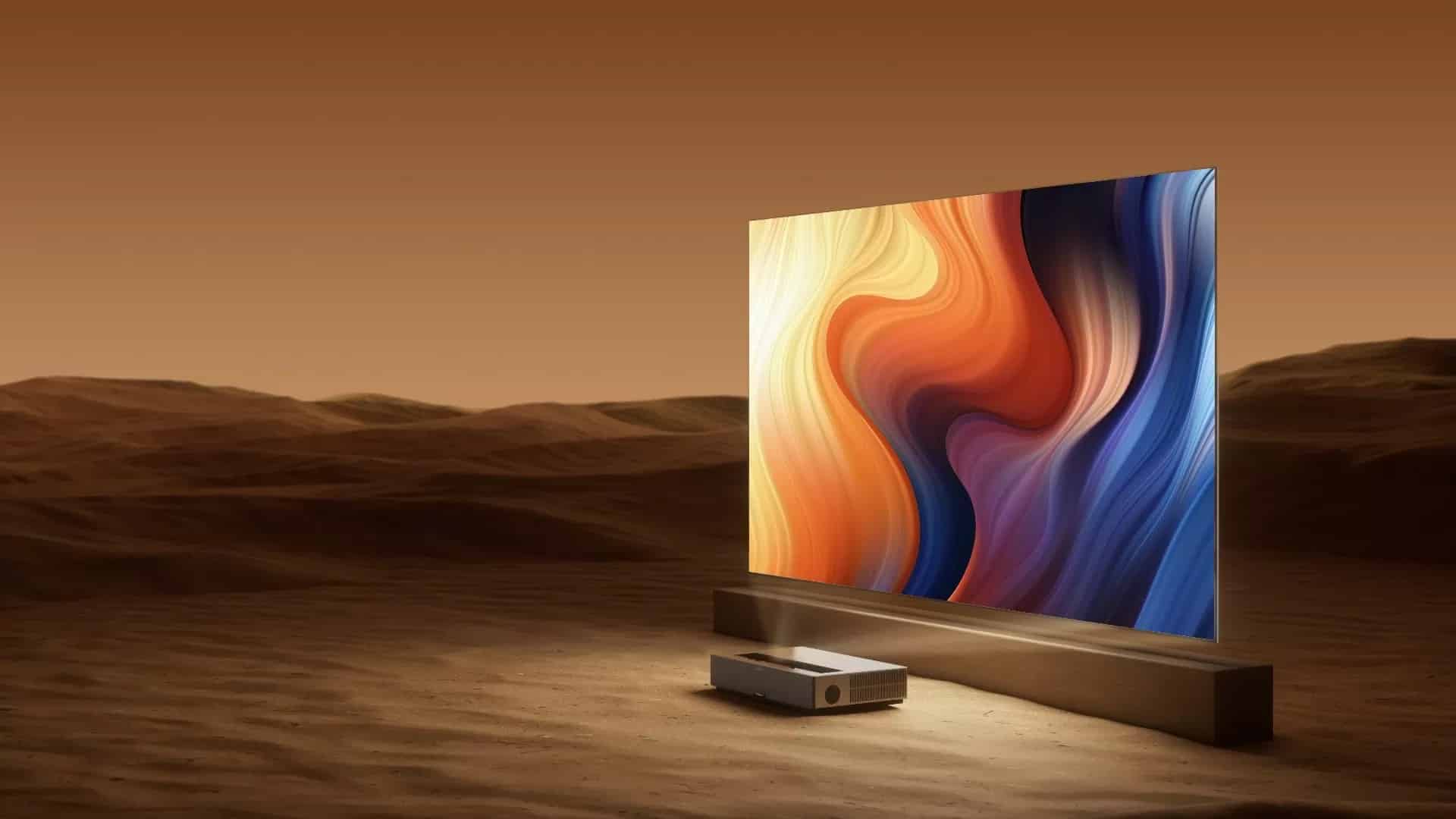 Unlike the above models, this one features the world’s most advanced ALPD 4.0 technology. Therefore, it provides much clearer pictures with improved brightness, saturation, and contrast. Compared to the previous generation of the technology, it is 30% more powerful, outputting 107% of the Rec.2020 color gamut and over 1.07 billion colors.

As for brightness and color reproduction, the Formovie Theater laser projector supports a brightness of 2800 ANSI Lumens. Also, it comes with Dolby Vision & HDR10+ support that offers full detail in highlights and shadows. The contrast ratio is 3000:1, which can capture sharper imagery and fuller saturation.

The throw ratio is 0.233:1. In simple words, the projector will throw a 120″ picture if placing it 12 inches far from the wall. However, the maximum projection size is 150”. Due to the 8-point keystone correction technology, you can adjust the projection form. The light bulb has a life span of 20,000. So if using it for two hours daily, the projector will last 26 years.

One of the best things about this laser projector is the audio system. The Formovie Theater Triple projector comes with an audio system tuned by Bowers & Wilkins engineers for people who love music. Plus, this product supports Dolby ATMOS, which creates exceptional immersion.

In terms of software and connectivity, the projector runs Android TV 11.0, which supports up to 5000 apps, like Disney+, HBO, Hulu, and YouTube. Due to the Google Assistant, the projector supports far-field voice control. So you can interact with it through voice commands. It comes with the most powerful built-in WiFi ever. As you guess, we are talking about the latest standard, WiFi 6. Besides various advantages, it boasts smooth performance. The projector also includes all necessary interfaces on the back. 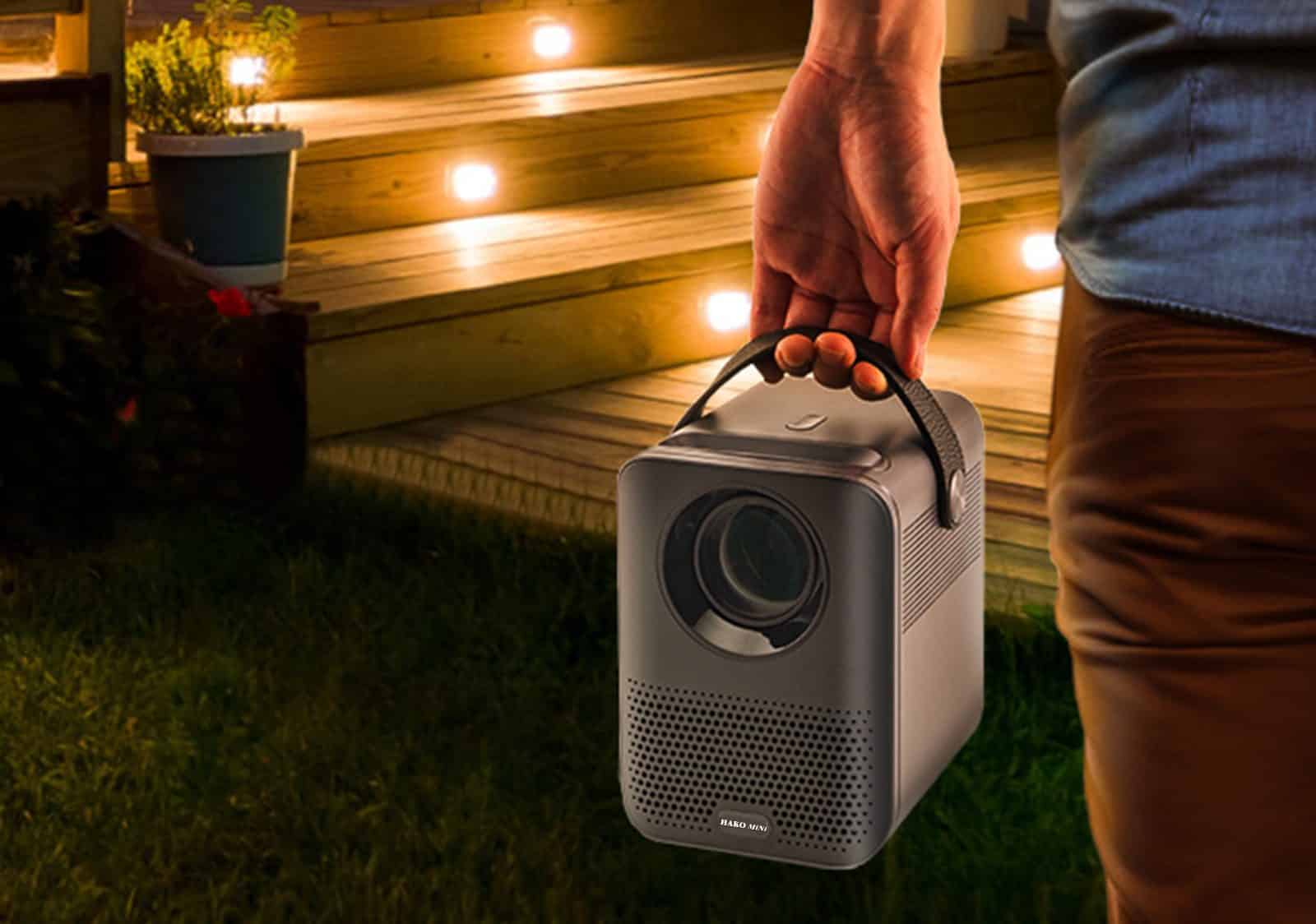 Maybe you are not familiar with this brand, but HAKOmini is a China-based manufacturer that makes intelligent gadgets at affordable prices. Though many would doubt the performance of products coming our way from similar brands, this is not the case. HAKOmini has overcome the problem of leaving black spots on the screen.

The HAKOmini PL3 is an excellent option to get acquainted with this brand. It’s a small portable projector that, apart from coming with a few selling points, also has a life span of 30,000 hours. Thus, you can use it for a few decades without considering replacing it.

What we also like is its noiseless operation. The projector operates at 32db, and even the intelligent cooling system inside doesn’t interfere with us from watching movies, playing games, or making a presentation.

This product has a keystone correction feature to display a balanced image even when it gets tilted in any direction.

The HAKOminiPL3 projector comes with several pre-loaded popular applications such as Netflix, Amazon Prime, YouTube, and Disney+. As it runs on Android, you can download and install any app from Google Play.

We can find DC, USB, HDMI, and audio interfaces on the back. At the same time, it supports ultra-fast wireless screen mirroring with a 2.4G/5G Wi-Fi connection.