Xiaomi has at least two smartphone brands apart from its original brand. The Redmi brand helps the company in its dual-brand strategy. Thus, the Mi series focuses on the premium segment, while the Redmi phones are considered cost-effective models. However, there is also POCO, which mainly sells phones in overseas markets that are known for their outstanding price-over-hardware ratio. Shortly, if you want to know who is offering the cheapest smartphone for a concrete configuration, first, check POCO. Recently, POCO announced that it would hold an online press conference on September 5 to release two new models – POCO M5 / M5s. 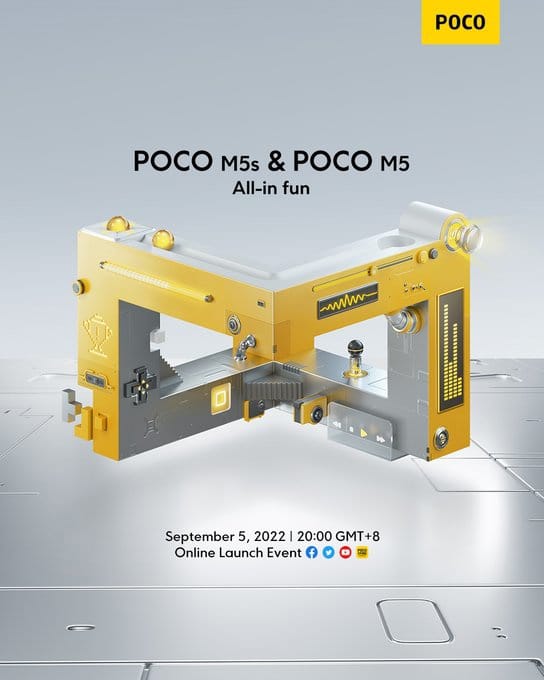 As pricebaba reported yesterday, the Xiaomi POCO M5s will have three colors – gray, blue, and white. In terms of storage, the machine will offer three storage variants: 4GB+64GB, 4GB+128GB, and 6GB+128GB. This is all we know about this handset for the time being.

What About POCO M5?

As for the Xiaomi POCO M5 standard version, previously, we heard that the machine ought to use a 6.58-inch FHD+ resolution LCD screen, MediaTek Helio G99 chip, and come in three storage options – 4GB+64GB, 4GB+128GB, and 6GB+128GB.

Under the hood, the POCO M5 Standard Edition will host a built-in 5000mAh battery and support 33W fast charging. The machine will run the MIUI 13 system based on Android 12.

On the side, it will carry a fingerprint recognition scanner, while on the bottom, we can find a USB-C port and a 3.5mm headphone jack.