Usually, customers do not distinguish between smart DC inverter electric fans and ordinary electric fans. But the former differs from the latter in almost all aspects. Below, we will get acquainted with the key features of such a product, but the most significant difference is that the wind volume is smaller. Moreover, they support mobile app control. In it, you can adjust the volume, which varies by 100 gears. Furthermore, the product we are talking about adopts a 2-stage fuselage, turning it into a taller vertical fan or a relatively short table fan. The Xiaomi Mijia Standing Fan 2 is a beneficial product; we will now dig into its details.

In the packaging, we can find the fan, which is disassembled into three parts – the fan, the pillar, and the base. However, it will take only a few minutes to make it ready for work. However, first, you have to decide where it will be placed. If you place it on a table, the pillar part can be put away. But if you want it to be on a floor, you should install the pillar and the base and then install the fan part. Just follow the instructions in the manual to install the rear fan cover, the rear fan cover knob, the fan blade, the fan knob, and the front fan cover. Afterward, tighten the fan to complete the fan installation. Lastly, pull the fan cover screws. 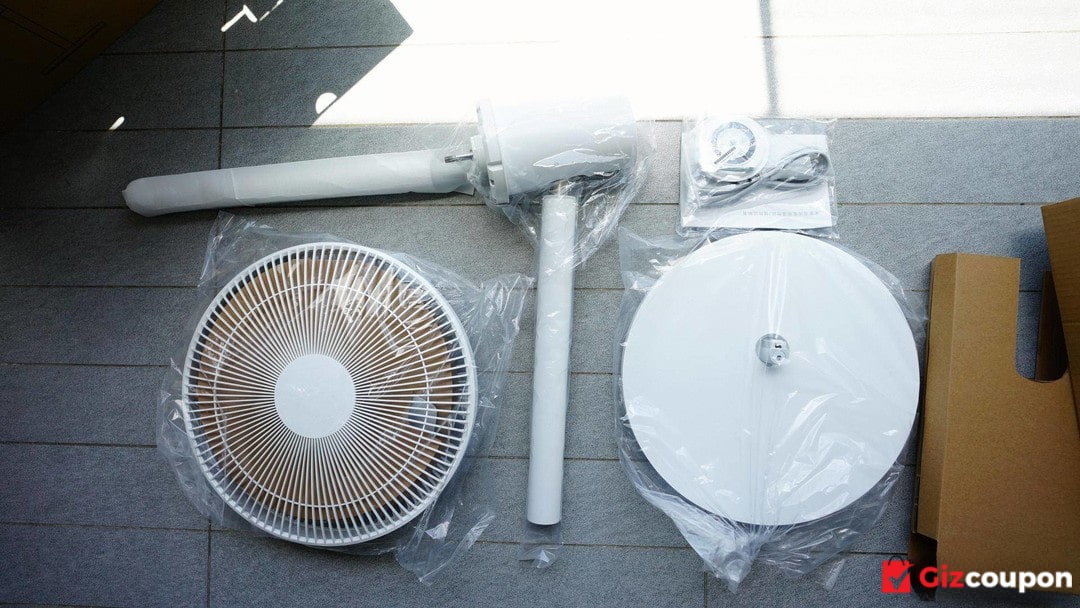 The Xiaomi Mijia Standing Fan 2 is available only in white. This is the color most Mijia products come in. The power cable connection port is directly behind the base. There is a non-luminous center indicator directly in front of the base. If looking at the fan from above, you can find the switch and various adjustment buttons, including the ON/OFF button, the air volume adjustment and mode switching buttons, the swing head button, and the timer shutdown button (2/3/4). 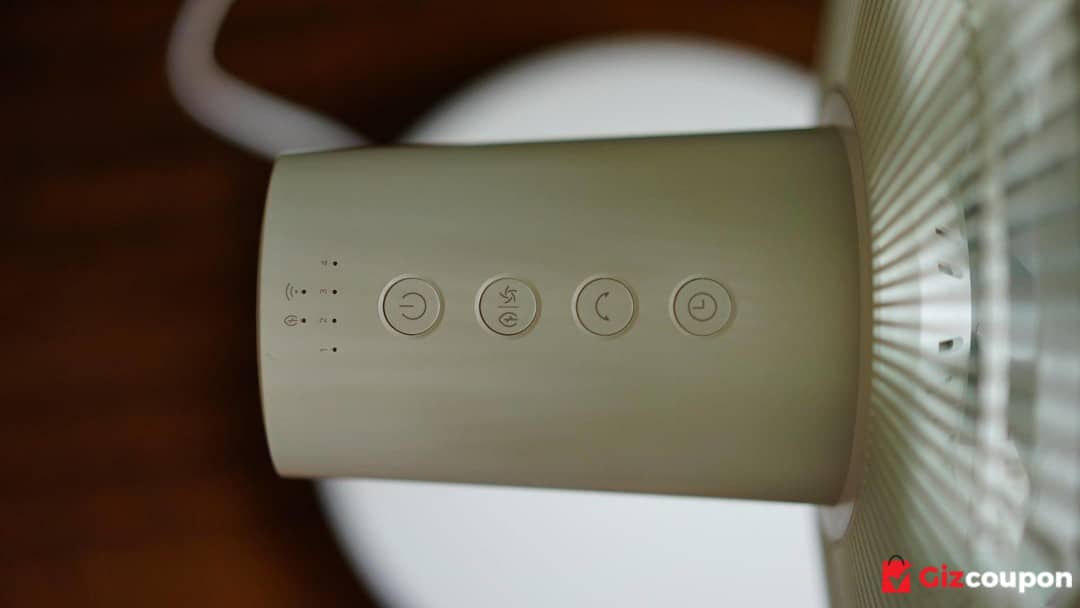 By the way, the knob of the rear fan cover is locked in a clockwise direction. So if you want to clean it, you have to turn it in the opposite direction. 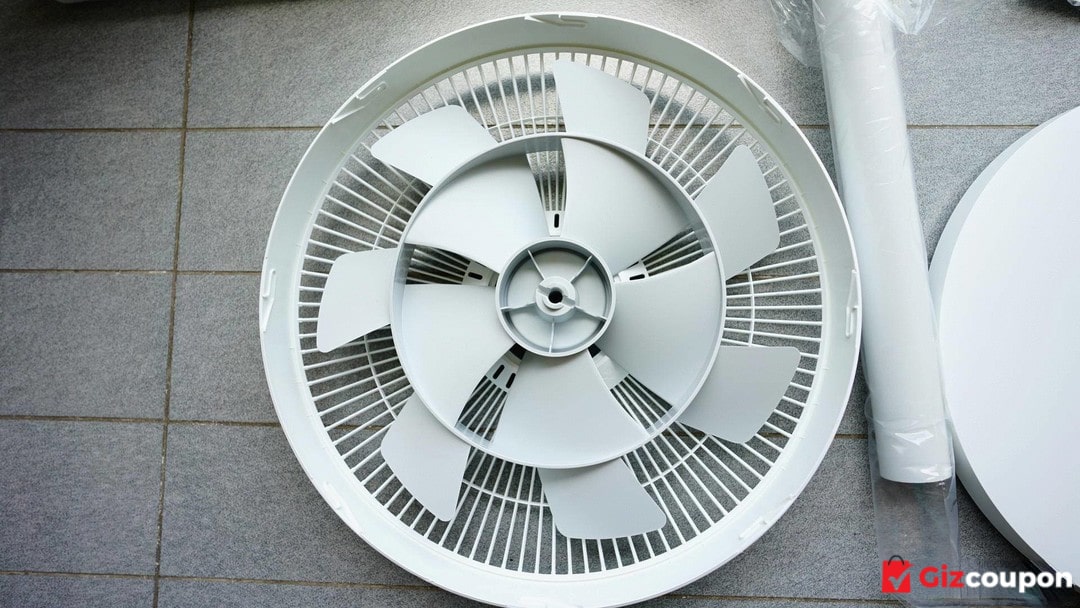 Generally, the fan doesn’t differ from many other fans on the market when looking at it from a side. That’s logical. But for such products, the appearance is not the main selling point. When people want to purchase fans, they want to know what features and functions it has. If that’s an ordinary fan, there wouldn’t be many features to show off. But we are talking about an intelligent fan. This “magic” word means that our protagonist should be a head higher than its rivals on the market. We are dealing with a Mijia/Xiaomi product. So that’s not difficult to guess that there is at least one trick. Below, you will see this fan’s main selling points. 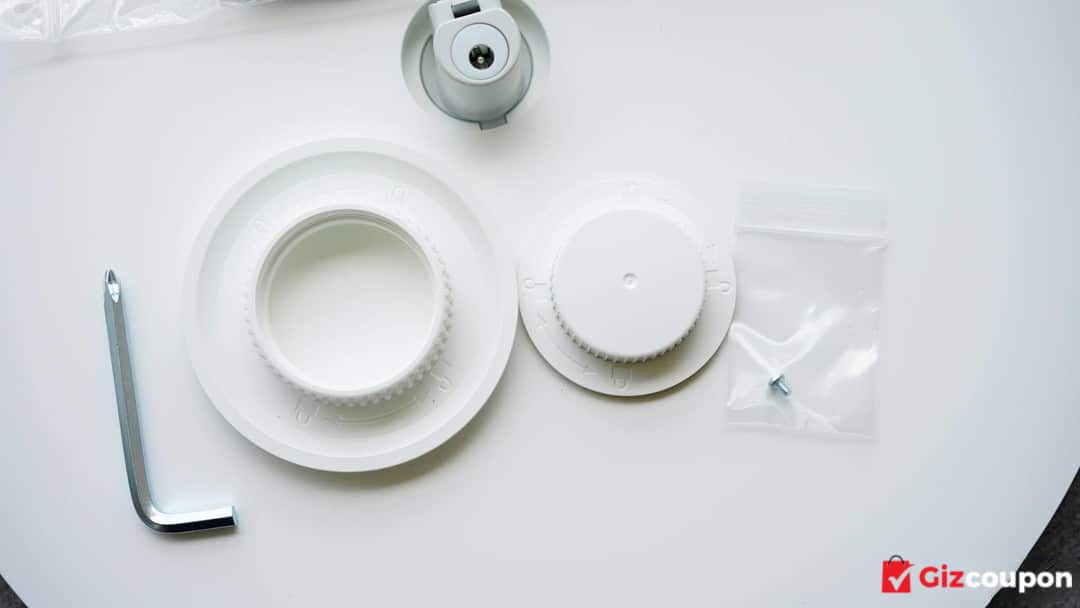 This is an intelligent fan. So we expect it to provide some “smart” features. Fortunately, there are many features you can work with in the Xiaomi app. For instance, in the app, you can switch between two modes: normal wind and natural wind. Then, you can control the air volume through the buttons. Though the app interface displays four levels only, in fact, it has 100 gears. You can see the current wind volume in the ”Fan Speed ​​Settings.” 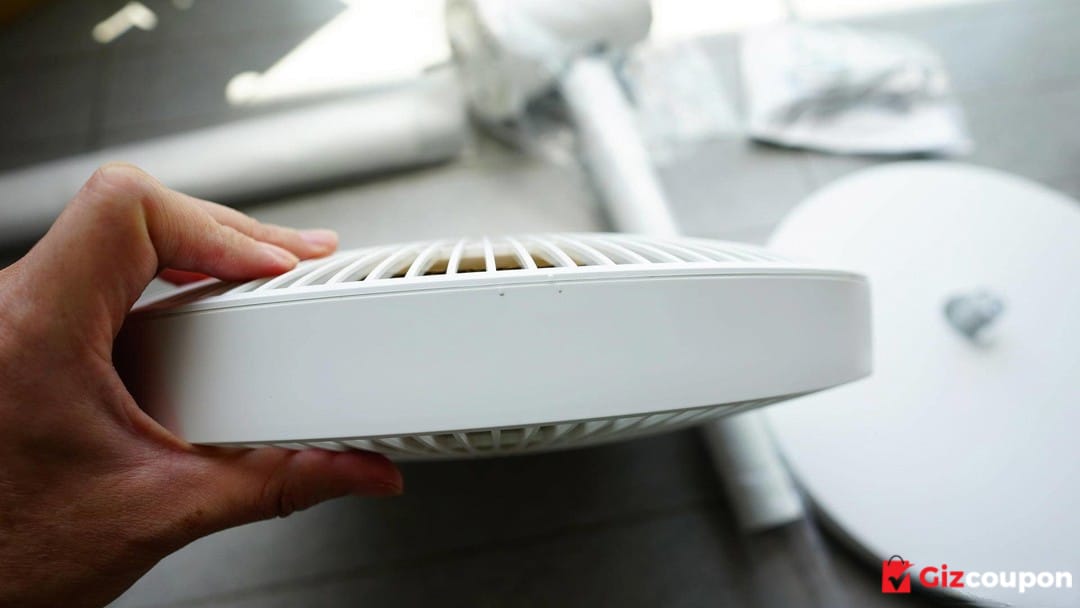 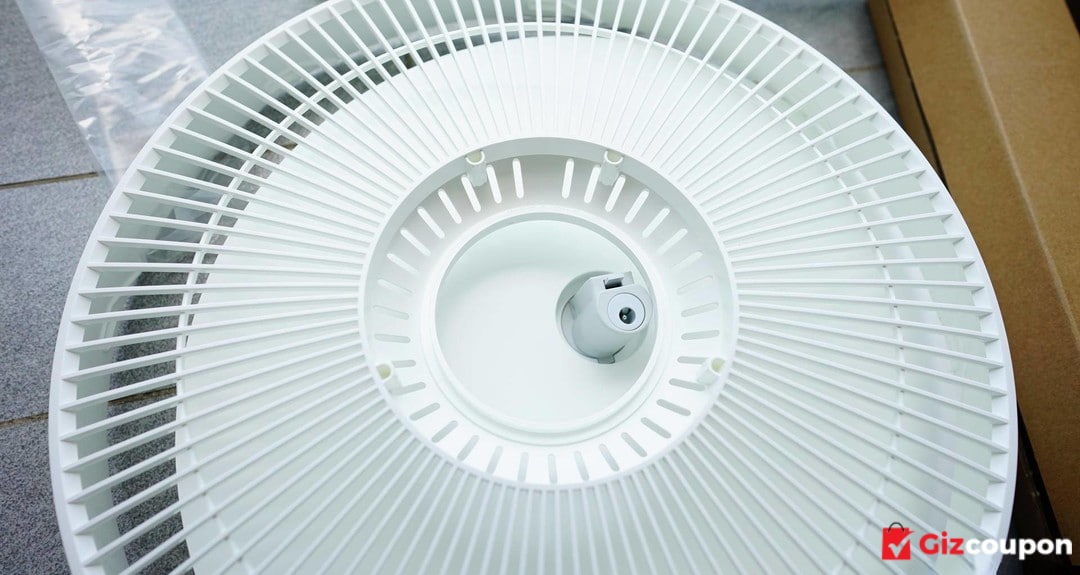 Another example of the button and app control difference. When you set the shutdown time through the buttons, the maximum supported time is 4 hours. However, the “Delayed turn-off” function supports up to 8 hours when using the app. 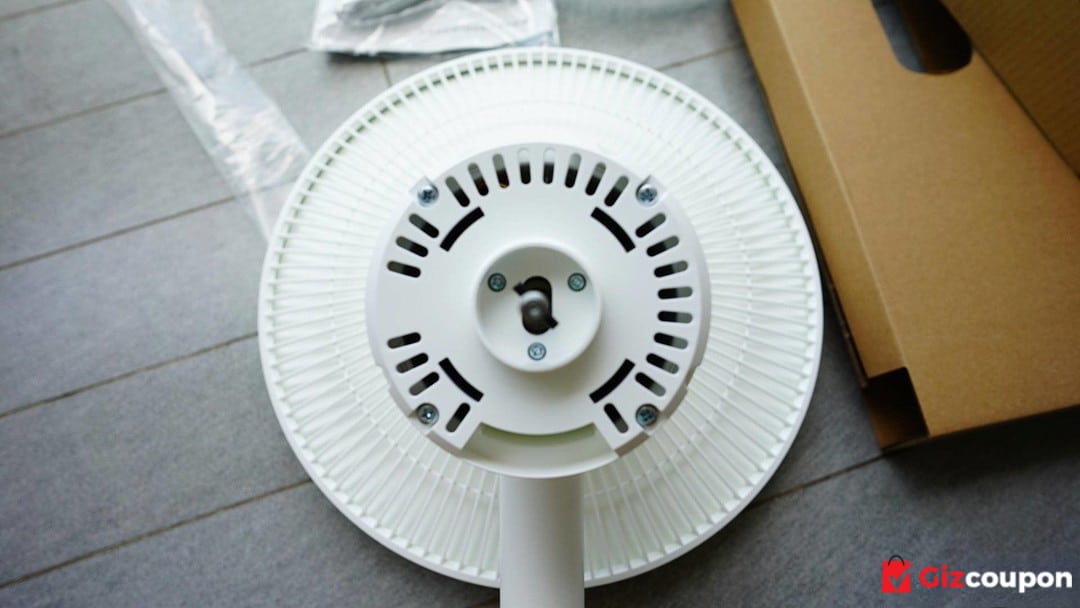 We should also say that if you want to reset the fan, in the app, press and hold power and air volume buttons behind the fan.

Oh, we forget to say that before turning it into a smart fan, you have to connect it to WiFi. 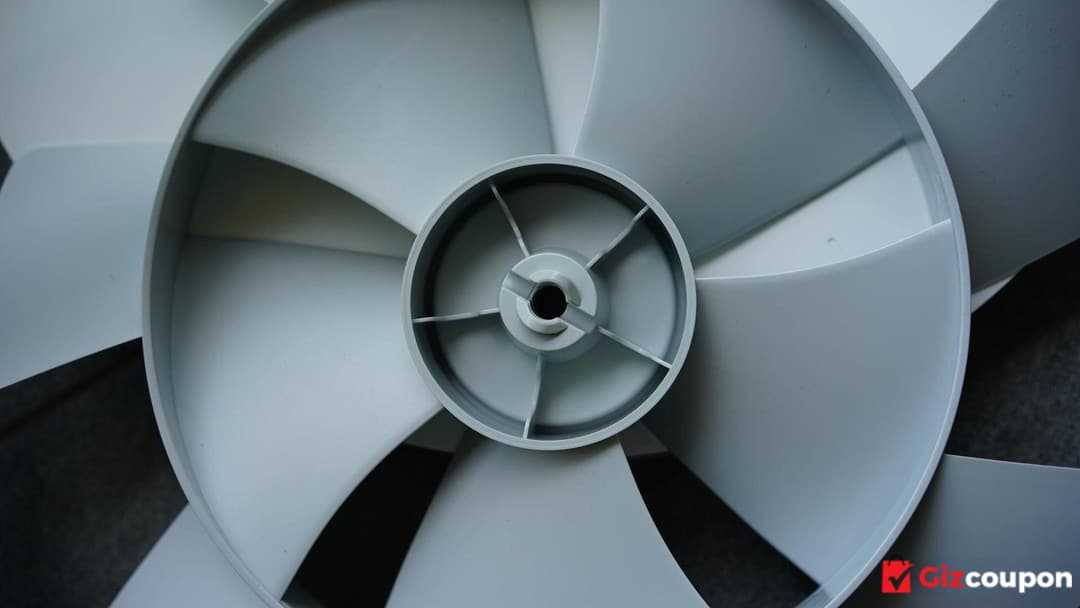 The base is entirely blank and has no buttons. So it’s ideal for those who have pets in the house.

Those who have many fans should like the Xiaomi Mijia Standing Fan 2. It is a rare and beautiful fan with all the intelligent features you need to control.

Besides this, as said above, this is a 2-stage pillar fan. So it’s comfortable to use on the floor and the table. Moreover, when the weather becomes colder and the fan becomes useless, you can break it apart and reduce the storage capacity.

Of course, the buttons on the top are enough to control the fan. But we do not recommend you to limit yourself with these buttons. This is an intelligent fan, and it’s illogical not to use the mobile app. If you want a traditional fan, you shouldn’t spend money on such products.

We find the offer compilation about Xiaomi Mijia Standing Fan 2 on Gizcoupon; the best price is $x5.99. If the deal has expired, please go to Gizcoupon to view the latest offer for this product.