Probably, you haven’t heard about this brand, but Kugoo is very famous in the segment. Also, it has a few models that can make competition with any top-branded electric scooter. The Kugoo Kirin S1 Pro is one of them. 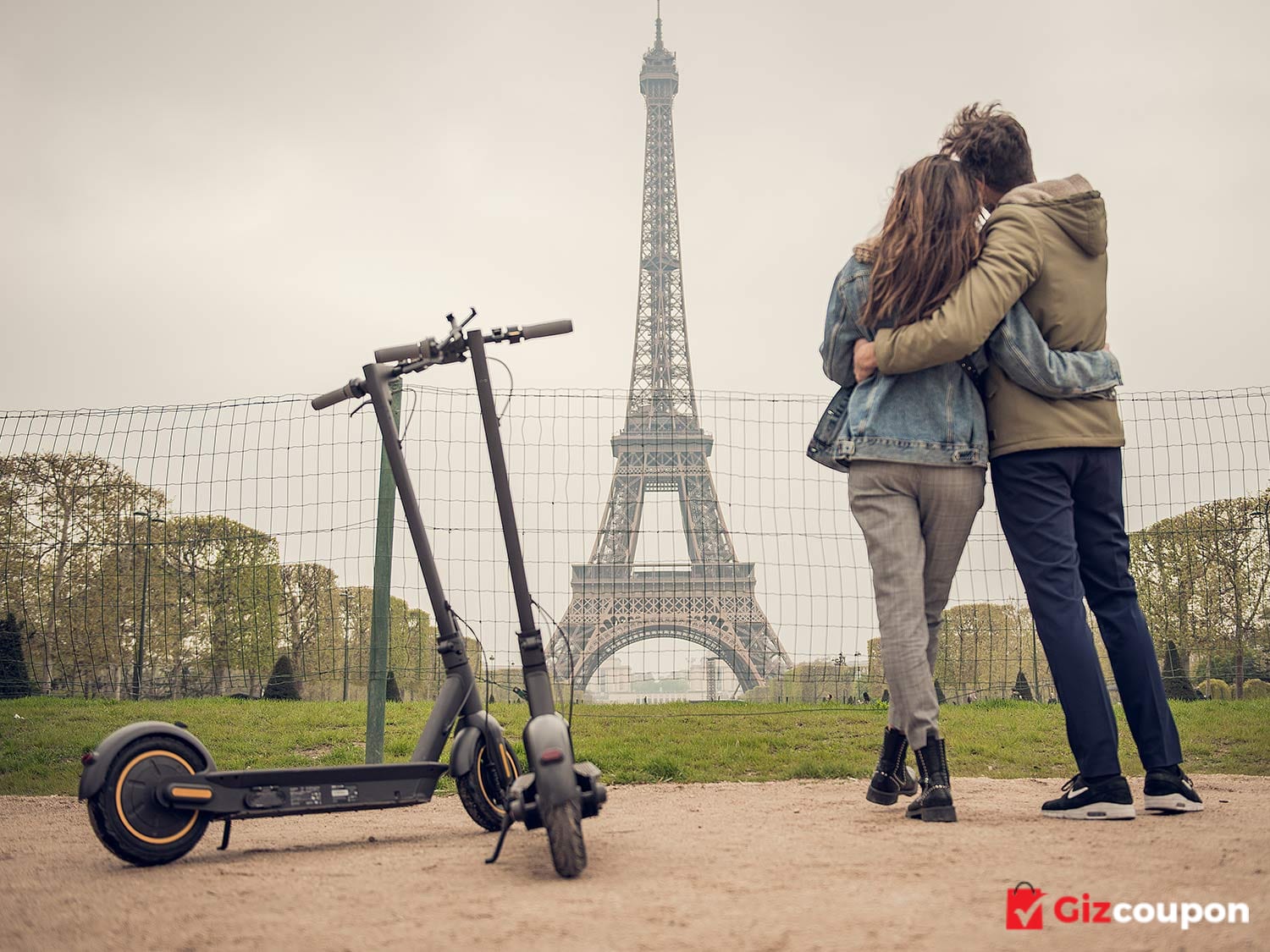 The scooter’s appearance is strict and restrained, but there are also aggressive elements. The steering wheel is straight. Rubber tips (grips) have strongly pronounced “pimples.” The texture is delightful to the touch. Also, it provides a good grip on the steering wheel.

As usual, on the right, we can find the “gas pedal.” When holding it, the latter will appear under the thumb. There is a non-slip rubber pad. On the left, we have the brake lever. It’s enough away from the steering wheel. So, reaching the brake will be a bit difficult if you have a small hand. Above the lever is a bell, which will make pedestrians pay attention to you.

We display a very unusual elongated octagonal shape in the middle of the steering wheel. However, it can reveal necessary information even under direct sunlight.

You can select various modes via the button below the display. In total, the Kugoo Kirin S1 Pro offers four modes:

In front, right on the display unit, there is a headlight. It provides good visibility at 7 meters. A light spot is enough to notice an unexpected obstacle on the road. The deck is fully rubberized. It is 45 cm long and 14 cm wide.

Well, one of the selling points of the Kugoo Kirin S1 Pro is its folding design. However, it’s a bit difficult to both fold and unfold. But this also has a positive side: the steering rack is held securely. 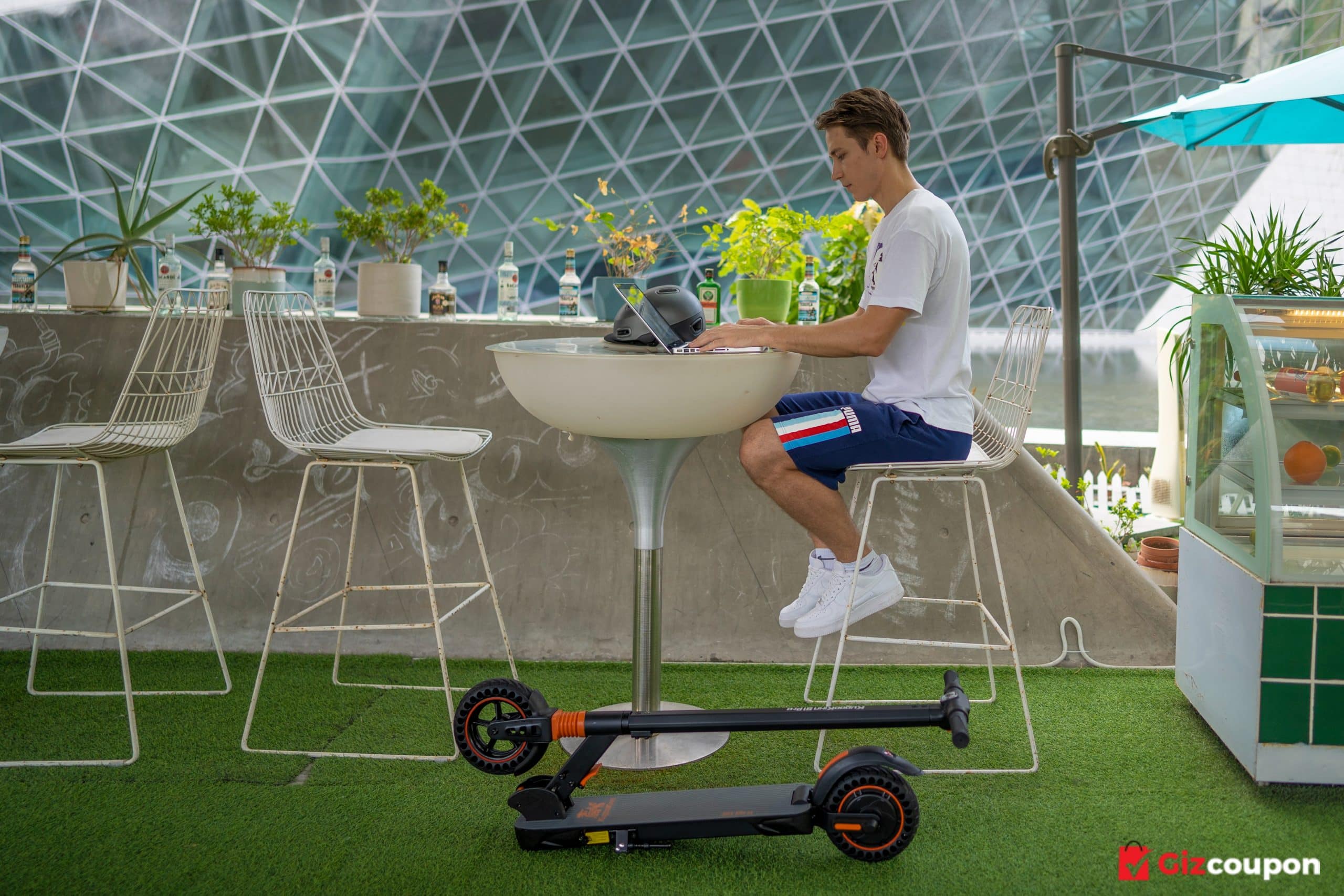 When folded, you can hold it by the rack and carry it out. The device weighs relatively low: 16 kg. So we guess no one will have difficulties when taking it with them. The top part is fastened with a hook and a latch.

Directly below the deck on both sides are blue LED strips. They turn on with the headlights on a double tap. They shine brightly enough, which significantly increases the visibility of the scooter in the dark.

There is a red marker on the back. It also turns on by double tap. It is obvious at night. Even if all headlights are off, the brake light will flash when you press the brake. 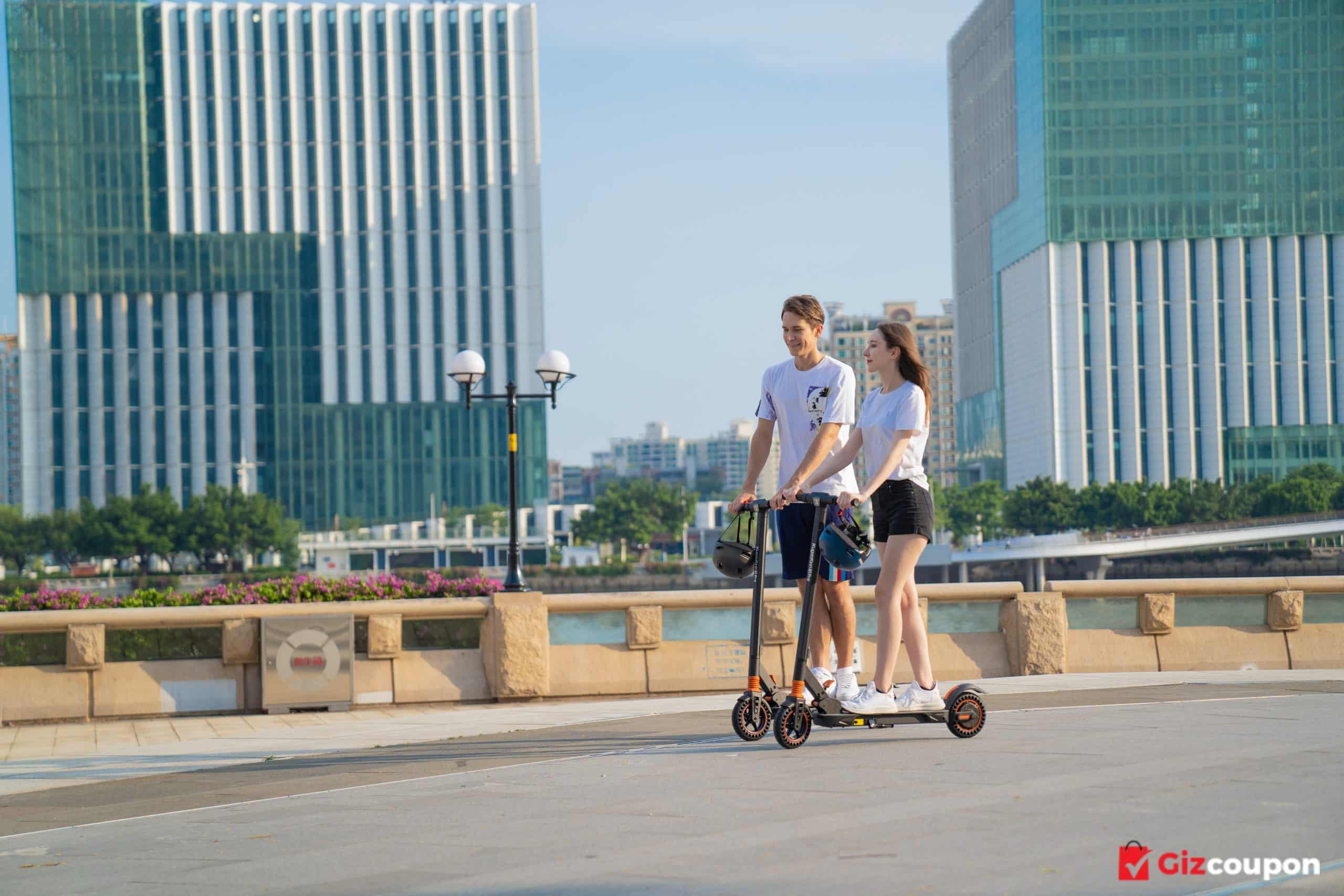 The Kugoo Kirin S1 Pro scooter has 8-inch wheels. Their width is 5 cm, and they are made of hard rubber. At the rear, we have an A-arm suspension and a spring as a shock-absorbing element. Unfortunately, there is no shock absorber in front.

The Kugoo Kirin S1 Pro is a front-wheel drive scooter with a 350-watt motor. Thanks to the latter, the scooter can accelerate up to 25 km/h. Acceleration is smooth, without sharp jerks at the beginning of the movement.

As for the braking system, it uses front electronic and rear disc brakes. The brakes work perfectly. However, when you try to stop suddenly, they show their rigidity – this must be considered. 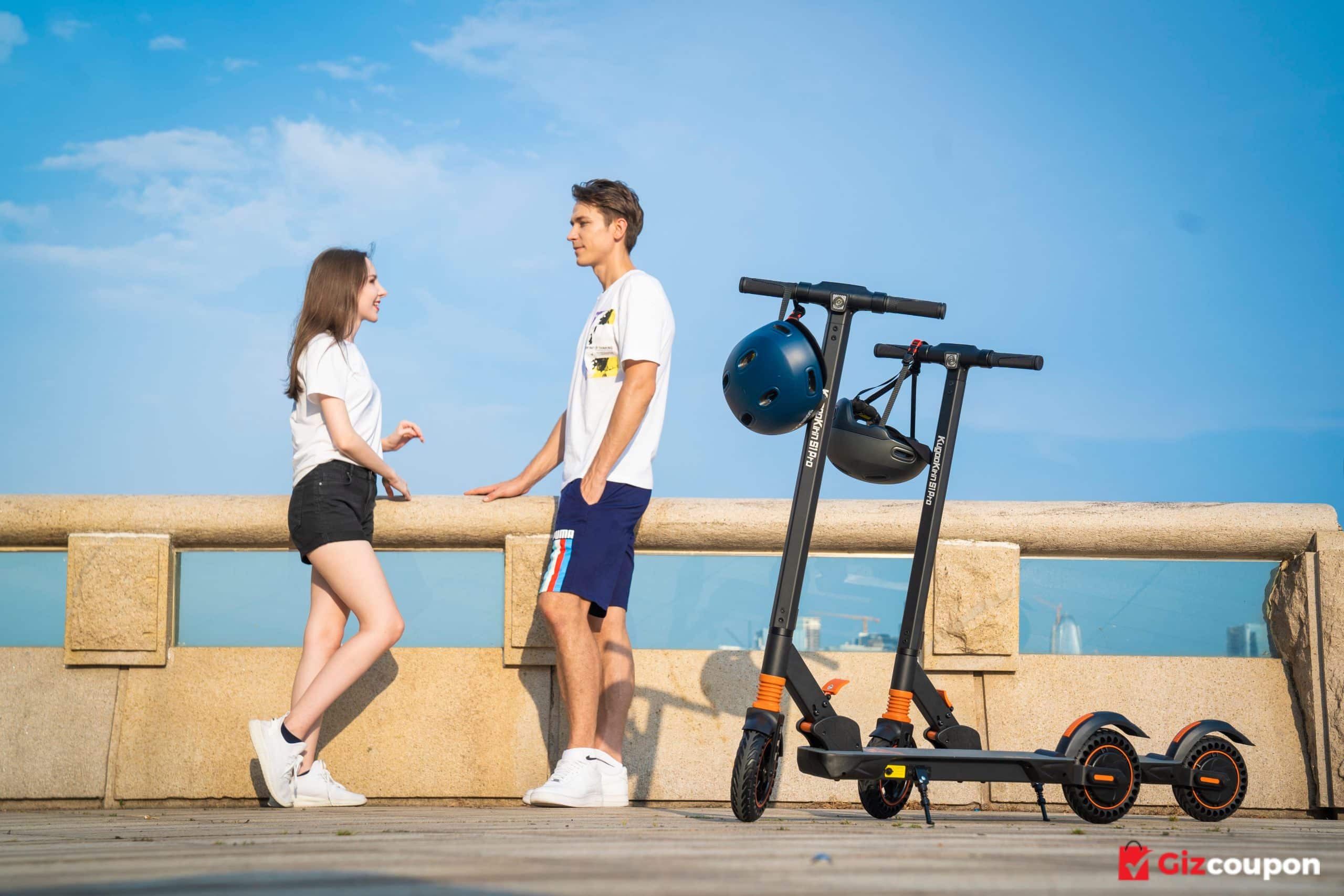 There is also a 10,000mAh battery. When fully charged, it will be enough to travel 23km. However, when headlights are ON, they won’t go so further. Also, it takes relatively long to charge – 6-6.5 hours.

The Kugoo Kirin S1 Pro didn’t perform well when riding in the park. You will feel every stone and a stitch. The reason is that there is no front shock absorber. 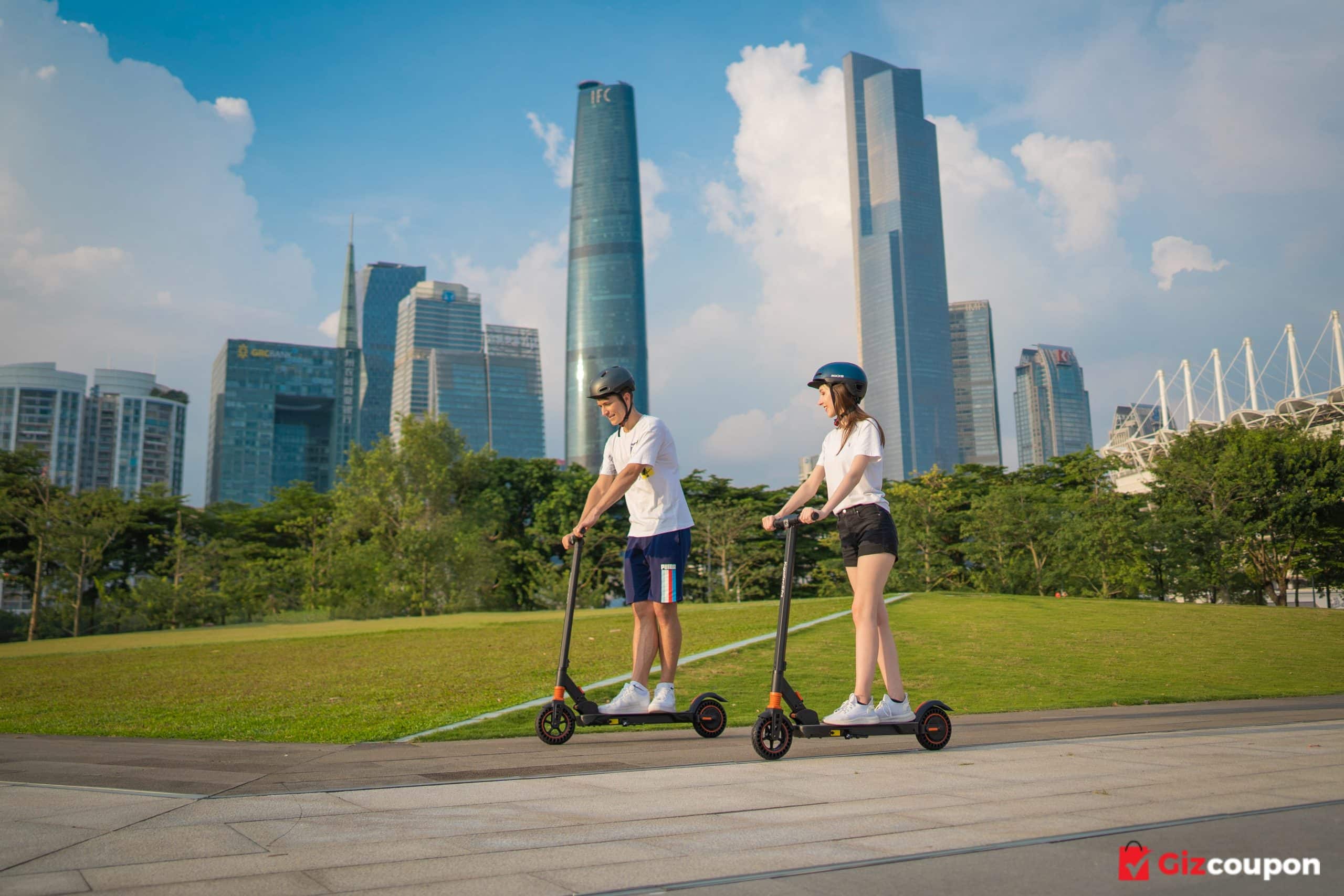 Nevertheless, the device accelerates well. The rider with a weight of around 80kg can easily reach the maximum speed and freely drive up the hill with an inclination angle of 40°. However, the manufacturer recommends an angle of 14°. Moreover, it would help if you considered that the maximum allowable weight is 100kg.

Well, we don’t think you will drive this electric scooter where you should walk. So when tested in the streets, the Kugoo Kirin S1 Pro performed flawlessly. 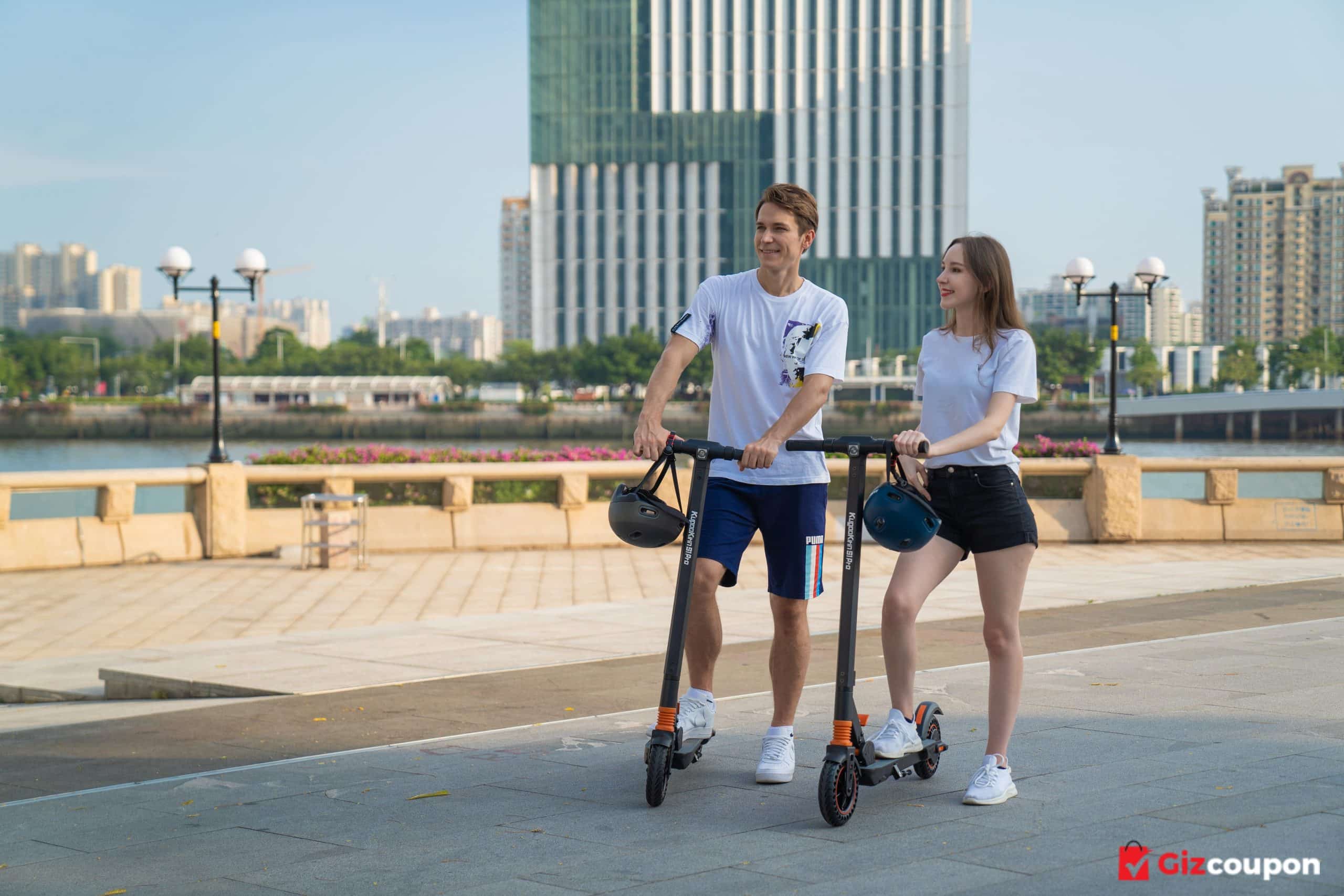 Also, we tested its endurance. When fully charged, in mode 3, it traveled 22km with the headlights off.

At first sight, the Kugoo Kirin S1 Pro comes with features identical to other electric scooters, including the Xiaomi 365. But as said above, there are some differences. Well, it’s better to say there are some shortcomings. First, it is the lack of a shock absorber on the front. Next, you should be strong enough to fold and unfold it. Three, it doesn’t travel long and has a long charging time. But we should consider that this electric scooter costs half of the other models on the market. So if you have been looking for a cheap electric scooter with acceptable performance, the Kugoo Kirin S1 Pro could be a good option.

We find the offer compilation about Kugoo Kirin S1 Pro electric scooter on Gizcoupon; the best price is $303.99. If the deal has expired, please go to Gizcoupon to view the latest offer for this product.