Home Reviews Roborock S7 Pro Ultra review: It will do the whole job, even self-emptying and self-washing

Roborock S7 Pro Ultra review: It will do the whole job, even self-emptying and self-washing

Everyone loves robot vacuums because they completely eliminate the need of cleaning the house ourselves. But until recently, the vacuum cleaners required some time, at least a few minutes every few days to carry out maintenance tasks such as emptying the dust container or cleaning the mop. The Xiaomi-related Roborock has decided to solve this problem by launching the Roborock S7 MaxV Ultra. The latter comes with a self-emptying station for dirt and water. Unfortunately, this model was priced too high. So users were asking for a more affordable model but with similar features. Today, we are going to review the Roborock S7 Pro Ultra, which is the vacuum cleaner that many users have been waiting for.

As you guess, this robot vacuum cleaner comes with a filling and self-emptying station. But unlike the S7 MaxV Ultra, many customers can afford this cleaner.

The Roborock S7 Pro Max combines the design of the previous S7 with that of the S7 MaxV Ultra. By saying this, we mean its body is made of plastic, with a glossy top and white finish, just like the S7. Since the top of the robot reverts to the glossy finish of the Roborock S7, it is not able to hide fingerprints and dirt very well.

However, there is a huge base of emptying, filling, and washing inherited from the MaxV Ultra. To blend in well with the robot, the base has been given a coat of white paint all around.

On the top, we can find a bulky part, which hides the laser-based navigation system. There are also three physical buttons that allow you to start or stop cleaning, send the robot to its base, or activate localized cleaning. If you don’t get what the latter means, by a single touch, the robot will start cleaning the area where it is at that moment.

What is different from the MaxV is the lack of an RGB camera. The reason is that our protagonist doesn’t support the Reactive AI system. So it doesn’t need a camera.

On the bottom, we can find three wheels that ensure its movement and rotation, anti-collision sensors, brushes, and the metal pins through which the robot is attached to the station to charge its battery.

You should know that the station is included in the box. This is the good news. But you should also take into consideration that it is huge. This is the bad news.

If you have a small house, this model is not for you.

By the way, each of the two tanks has a capacity of 3 liters. It is worth mentioning that both have a silicone seal on the top that makes them completely airtight.

The largest tank contains the bag where the dirt sucked up by the robot will be stored.

Though the standard mode is capable of doing the job, when the Turbo mode is turned on, you won’t be able to stop the beast.

What we liked more is that the maximum noise it generates does not exceed 67 dB. So when taking into consideration its power, this is one of the quietest robots on the market.

Mopping is handled by the brand’s well-known VibraRise system. The latter can vibrate the integrated bottom mop up to 3,000 times per minute to remove even the toughest stains.

One recommendation – when you have to clean carpets, do not use the Standard mode. The robot will suffer when trying to remove the dirt “stuck” on the fabrics. Fortunately, the app includes a carpet detection function that increases power to the maximum when the robot detects that it has started to vacuum on a carpet or rug. 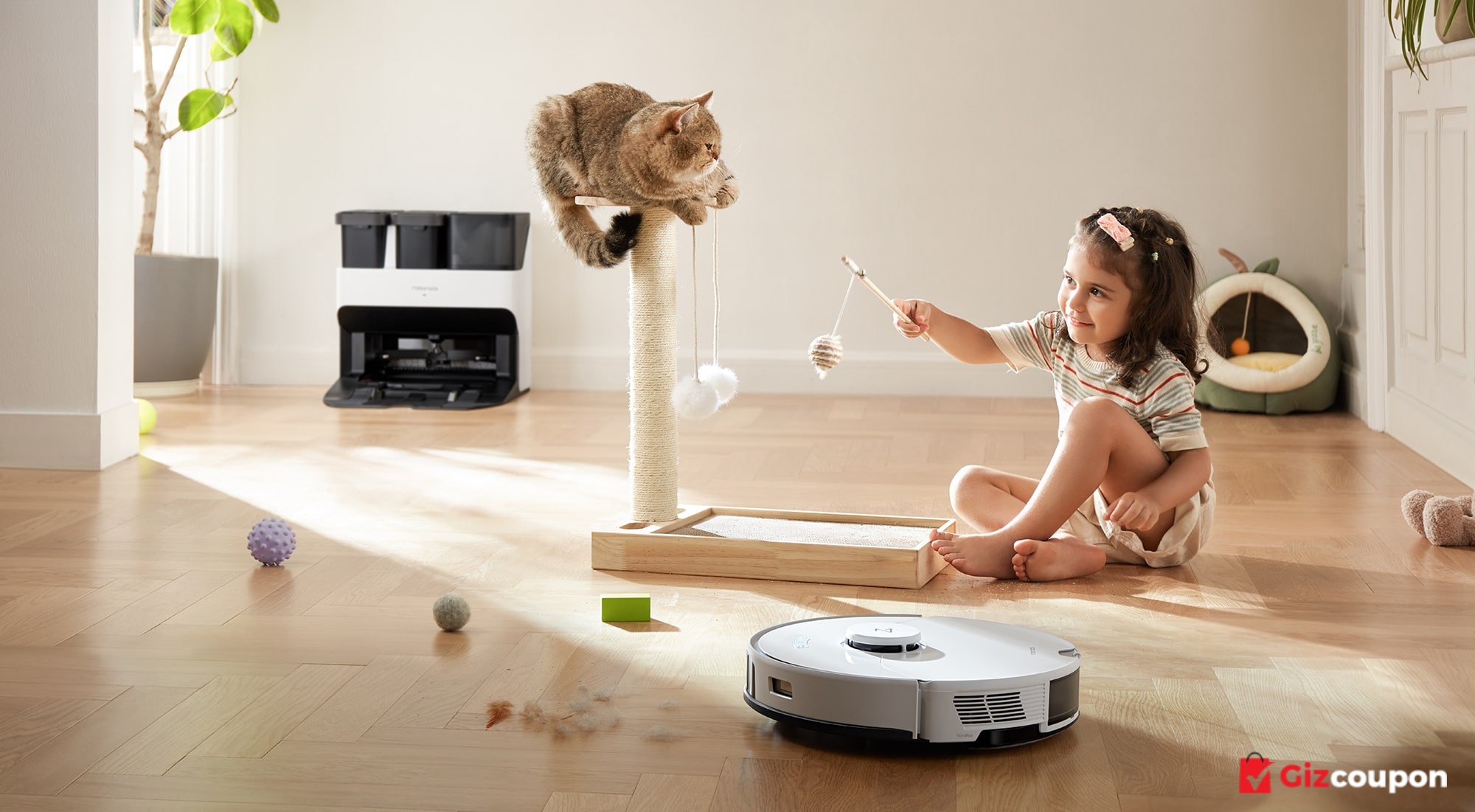 In addition to that, the VibraRise system also includes the function of automatically raising the mop to avoid wetting carpets and fabrics. However, this works when the carpet has a reduced thickness.

One of the biggest differences between this model and the S7 MaxV Ultra is navigation. We mean due to the RGB camera on the latter, the MaxV works much better. But our protagonist lacks Reactive AI 2.0 technology. In daily use, it will be reflected in the following way – the Roborock S7 Pro Ultra won’t identify certain objects that it finds along its route.

It uses the much-popular LiDAR system.

However, we should say that this robot vacuum comes with sufficient features and technology to carry out precise navigation. For instance, it uses the LiDAR system identical to the one found in the S7 MaxV Ultra. So it can ensure extremely precise mapping making cleaning more effective. Also, it allows the robot to avoid obstacles, traffic jams, and falls.

At the end of the cleaning, the robot will travel back to the station to empty the dirt it collected and wash the mop. If necessary, it will do so a few times during cleaning. Also, the washing process takes a few seconds. Emptying the dirt container also lasts 10-20 seconds.

Roborock promises us autonomy of up to 180 minutes with a single charge thanks to its 5200mAh capacity battery.

In order to understand how often it will charge, just know that cleaning 60 square meters takes around 30 minutes. This will drop the battery power from 100% to 70%. But you don’t need to worry about low power. Once it understands that it needs power, the robot will go to the station for gas.

Like other Roborock vacuum cleaners, it is possible to manage and control the Roborock S7 Pro Ultra with both the Roborock app and the Xiaomi Home app.

This app has a clean, simple, and easy-to-use interface. Once the robot appears on the list, we will see tons of useful options. For instance, we can tell it to start specific cleaning routines or see the notifications that our robot has sent. Also, the S7 Pro Ultra can “talk” to us in several languages.

It can “talk” to us in several languages.

When accessing the robot section, the first thing we will see will be the map of our home. It is completely customizable, and there is an option allowing us to modify the different spaces. In addition, the 3D map option will show us the walls and obstacles that the robot has been encountering.

Within the robot settings, we can find a large number of options that allow us to configure its behavior. From the frequency with which the mop is washed or the dirt container is emptied, to the order of the rooms that must be followed in each cleaning process.

As you can see, Roborock has set a very high bar. We can’t say it has no rivals on the market. No. Other brands design very smart robot vacuums as well. But what makes the Roborock S7 Pro Ultra is its price. It’s not low, around $1200. But This is the case when we have to say it’s worth the money.

We find the offer compilation about Roborock S7 Pro Ultra on Gizcoupon, the best price is $x99.99. If the deal has expired, please go to Gizcoupon to view the latest offer for this product.