Home News Redmi k50 ultra will not use 2k screen, but other features are still impressive

Redmi k50 ultra will not use 2k screen, but other features are still impressive

In August, we will meet a number of new flagships from various brands. They all are focusing on the second half of the year and have a goal to boost their sales. Redmi is no exception. According to Lu Weibing and his frequent statuses, the Redmi K50 series, including the Redmi K50 Ultra will be released this month and make a tough competition to other models on the market.

Today, a Weibo leaker showed a screenshot from the AnTuTu database, which refers to the alleged Redmi K50 Ultra. If this news is accurate, the Redmi K50 Ultra will sport the Snapdragon 8+ Gen 1 chip. It scored 1,120,691 points in the benchmarking platform.

Though it’s a bit unexpected that the Redmi smartphone comes with a Snapdragon 8+ Gen 1 chip, we have to point out that this is a standard configuration for the Android flagships scheduled for the second half of the year. In comparison to the vanilla version, this chip has a CPU frequency increase to 3.2GHz. At the same time, the power consumption is way better. There will be two 12GB+256GB and 8GB+128GB storage versions.

The camera section has been improved as well. According to various rumors, the phone will come with a 200-megapixel main camera sensor. If so, it will become Xiaomi’s first smartphone featuring such a high-res sensor. As you guess, its direct rival will be the Moto X30 Pro.

In other aspects, the Redmi K50 Ultra will provide flagship-level specs as well. For instance, the phone is going to support 120W flash charging, which takes less than 20 minutes to charge a 5000mAh battery from 0 to 100%.

Unfortunately, the K50 Ultra canceled the 2K screen. Although the screen parameters are still impressive. For instance, it will come with a 6.67-inch flexible OLED screen with a resolution of FHD+ and a refresh rate of 120Hz. Generally talking, this phone will be identical to the Redmi K50 e-sports version with some changes. The screen has received a DisplayMate A+ rating, setting 15 image quality records at one time. These include the highest contrast ratio, lowest screen reflectivity, smallest viewing angle brightness variation, largest screen native color gamut, best white color accuracy, best absolute color accuracy, highest full-screen brightness for an OLED smartphone, and more.

The most important thing is that this screen also supports 1920Hz PWM high-frequency dimming. Compared with the conventional 480Hz, the dimming frequency is increased by 3 times, which can not only keep the color accuracy in dark light but also solve the “low brightness stroboscopic” eye injury problem.

The Redmi K50 Ultra may be named Redmi K50S Pro in other markets. 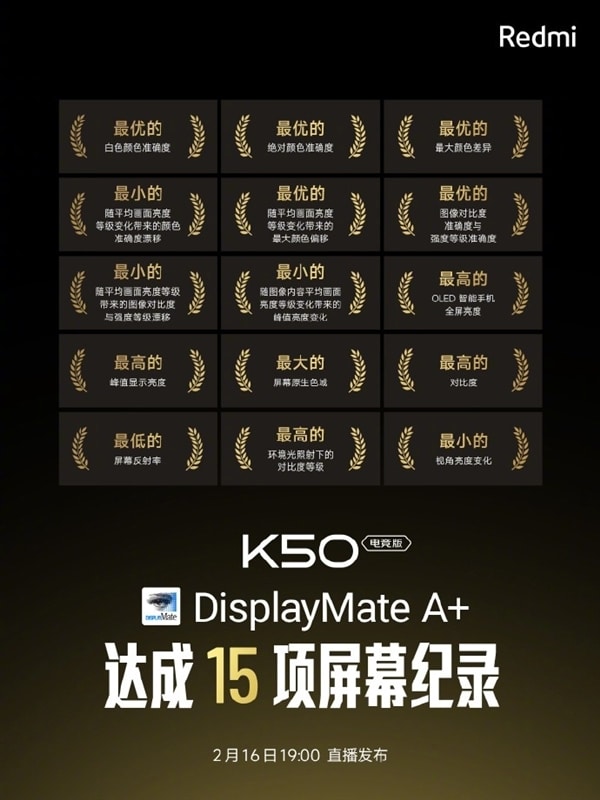