Today, very quietly, Xiaomi Mall launched the Xiaomi Capsule Headphones Pro. The price is only 129 yuan ($19). At the same time, we have to point out that there is a standard version priced at 99 yuan ($15). Though their listings appeared on Xiaomi Mall, there is still no date for their official announcement.

The Xiaomi Capsule Headphones Pro has a built-in coaxial dual-unit structure. Compared with single-moving-coil headphones, the dual-moving-coil structure is designed to provide a higher-quality, broad, and bright mid and high-pitched experience in addition to continuous and abundant bass. Shortly, such an appearance makes the headphones provide way better performance than others.

In addition to the hardware, the frequency response curve of the earphones has also been repeatedly adjusted to allow the clear midrange to separate the instruments and restore the real human voice. 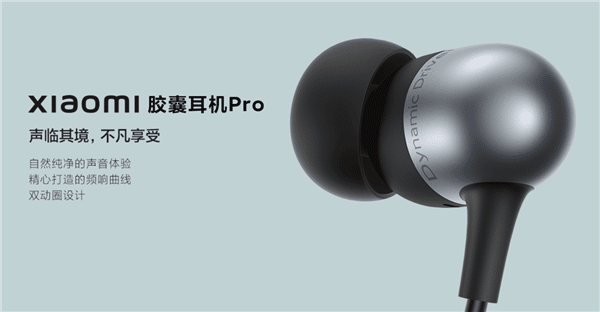 In terms of functions, the Xiaomi Capsule Headphones Pro comes with a three-button control, which consists of a function key as well as a volume rocker. There is also a built-in high-sensitivity microphone, and the wire control supports most headphones and notebooks with a 3.5mm interface.

In terms of the overall design, the Capsule Headphones Pro adopts soft non-slip earplugs. They fit the human ear canal design and can remain stable even if worn for a long time. The capsule body is anodized and has the characteristics of corrosion resistance, scratch resistance, and fingerprint resistance.

As for the standard version of Xiaomi Capsule Headphones, it adopts a new balanced damping system. The latter can fully flow sound and airflow, effectively reducing the interference of reflected sound on the diaphragm. Therefore, it can make the sound effect more three-dimensional and transparent.

As you guess, these are not the first headphones of Xiaomi. But it turns out the company doesn’t update the line frequently.