Recently, Xiaomi has officially announced that it will release the MIX 4 model on August 10, which will also serve as the flagship model in the second half of the year, supporting Xiaomi’s new high-end market.

It is a pity that Xiaomi has not officially announced any detailed information about the MIX 4, including configuration, appearance, and other aspects.

However, this afternoon, a well-known blogger exposed the machine’s first running score information. It shows that the machine comes with a 3.0GHz chip, which corresponds to the latest release of Qualcomm’s Snapdragon 888 Plus. Thus, the MIX 4 will also become the first model of this chip. 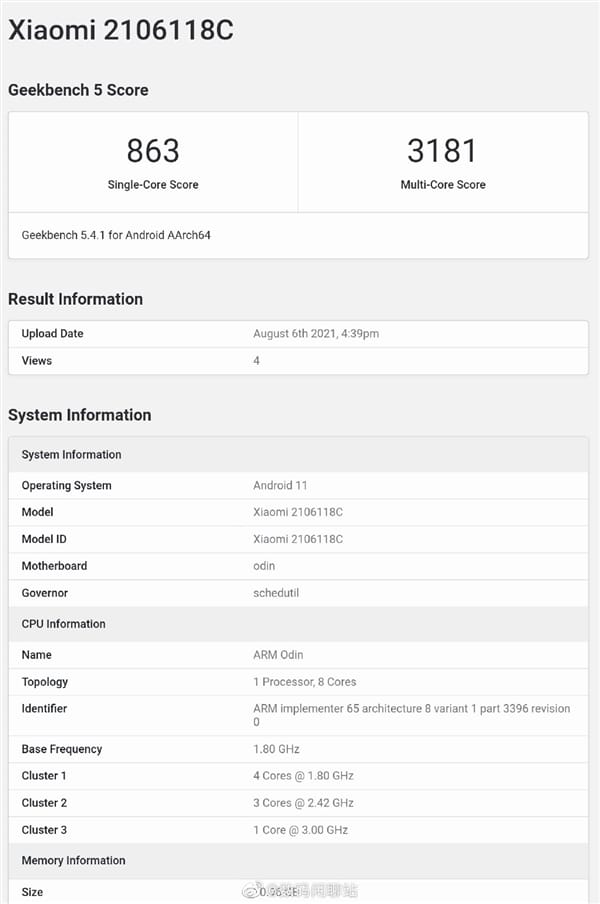 In terms of specifications, the Snapdragon 888 Plus still uses a 5nm process. It uses Cortex X1 super core, Cortex A78 large core, and Cortex A55 three-cluster architecture. The super core CPU frequency is up from 2.84GHz to 3.0GHz. There are three 2.4GHz Cortex A78 and four 1.8GHz Cortex A55 energy-efficient cores as well as the Adreno 660 GPU.

In addition, the Qualcomm Snapdragon 888 Plus has greatly improved AI performance. It features Qualcomm’s sixth-generation AI Engine, and its AI computing power has reached 32 TOPS, which is better than Snapdragon 888’s 26TOPS.

Also, previous network access information also revealed some data of it. The MIX 4 will have a storage combination of up to 12+256GB. It is also the top specification among the current mainstream flagships about storage.

In terms of charging specifications, the Xiaomi MIX 4 will come with a 5000mAh super battery, which should be similar to the silicon oxide negative battery on the previous Xiaomi Mi 11 Ultra. The phone will support 120W wired and 70-80W wireless fast charging.