Recently, Counterpoint Research published its latest report concerning the European smartphone market. It turns out that the whole market faced a huge 12% decline in the first quarter of the current year. Among the reasons affecting the smartphone market performance, we can mention COVID-19 and the Russia-Ukraine war. Xiaomi has been always performing quite well in this region. But it couldn’t avoid a drop in numbers as well.

Xiaomi has serious problems in this market. And it is mainly related to shortage. But this is the case when we can say that it’s not its responsibility. We mean because of the aforementioned reasons, all manufacturers are facing the same problems. The semiconductor manufacturers are not able to supply as many components as ordered. So there is every reason to think that the situation will worsen in the future as well. 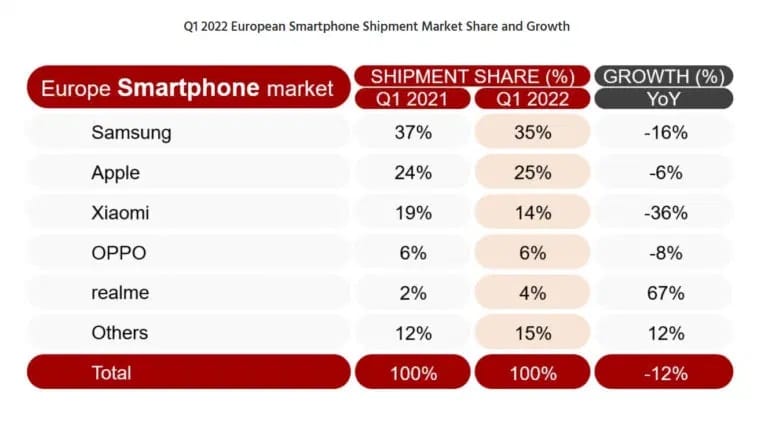 Anyway, Samsung still remains the number 1 smartphone maker in the world and in Europe as well. In the first quarter of 2022, the South Korean company captured 35% of the European smartphone market. Apple breaths on the neck of Samsung, capturing 25% of the market. And our favorite Xiaomi ranks third. Its market share dropped from 19% to 14%. This is more than that of other brands. And when talking about this, we should take into consideration that the Xiaomi category also includes Redmi and POCO.

How Other Brands Perform In European Smartphone Market

Other Chinese brands such as OPPO and Realme ranked fourth and fifth, respectively. They got 6% and 4% of the market share, respectively. OPPO also includes the OnePlus brand. Interestingly, Realme is the only brand to have an annual shipment growth in Q1 2022.

“Looking forward, the overall situation is expected to get worse before it gets better. Many countries in Europe are perilously close to recession, and the Russo-Ukraine war is unlikely to be resolved any time soon. Annual growth in smartphone shipments is therefore expected to continue to decline for the next few quarters, especially in Q2 as the cost of living across the region hits record highs, and the full impact of Samsung and Apple’s withdrawal from Russia is realized.”