This is a monster-size phone. The Xiaomi Mi 11 Ultra would be big for a handset even if it didn’t have that massive rear bump; with it, the thing is a blunt weapon. The phone has dimensions of 164.3 x 74.6 x 8.4mm. The camera bump isn’t included there, but we’d estimate that it pushes the thickness over 10mm. It weighs 234g. Thus, it’s among the heaviest flagship phones on the market. 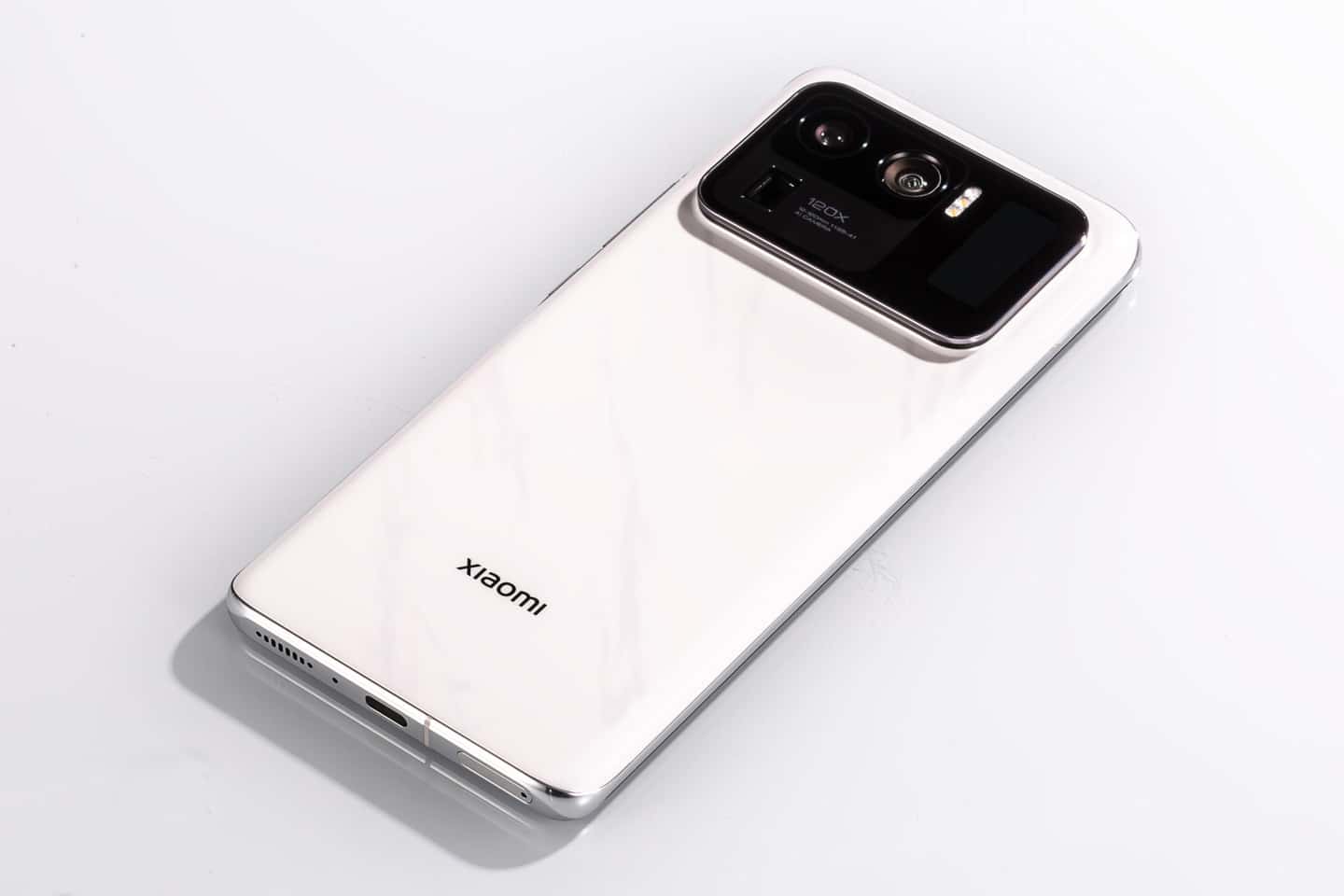 On the bottom edge, there’s a USB-C port, but no 3.5mm headphone jack – sorry, wired audio fans. The phone has a dual-SIM slot, but no microSD card slot, so there’s no expandable storage. On paper, it sounds like the phone is well protected. Its glass back is made of Corning Gorilla Glass Victus. The latter is a toughened type of glass – though ‘tough for glass’, doesn’t speak volumes on the material’s hardiness. The phone is also IP68 protected against water and dust.

There are some fun aspects to the bump. We could use it to hook the phone onto our laptop, which was a handy way of letting us multi-task. When holding the phone in landscape, we could use the bump as a grip.

The Xiaomi Mi 11 Ultra has the exact same display as the ‘vanilla’ Mi 11 – it’s a 6.81-inch screen curved at edges, with a cut-out for the front camera in the top-left corner. At that size, the phone has one of the biggest displays we’ve seen on a phone; it’s not just ‘Ultra’ in name. With a 1440 x 3200 resolution, the screen is higher-res than the standard 1080p most phones use; and with a 120Hz refresh rate, HDR 10+ support, 1700 nits max brightness and AMOLED technology, it’s one of the best-looking displays we’ve seen on a phone.

There’s also an in-screen fingerprint scanner here. In the past, Xiaomi phones had issues with this piece of tech, as they can often be temperamental to use, and while the Mi 11 Ultra doesn’t have the same issues as the Mi 11, we still often have to lift and replace our thumb to get the scanner to recognize our print. 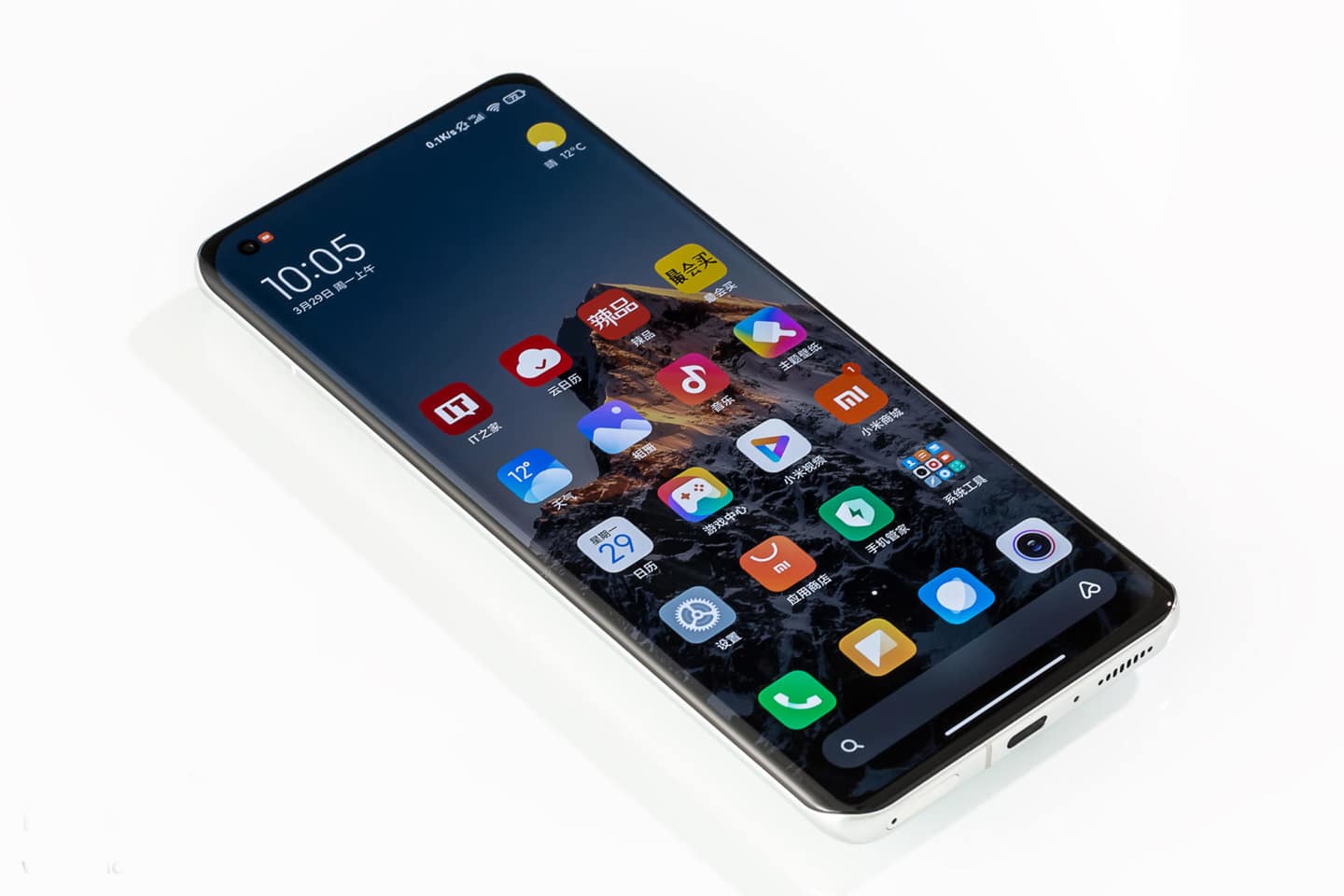 Its main use is as an always-on display, so when you place your device screen-down you can still see the time and your battery level. However, while that’s the theory, it’s not actually ‘always’ on – it switches off after a short while, so it’s not too useful.

The rear display also works as a viewfinder for photography. So when you’re taking a picture of someone with the rear cameras they can see how they look. As you can imagine, however, a 1.1-inch screen is hard to see from a distance. So the display doesn’t work for this purpose very well either.

The Xiaomi Mi 11 Ultra has three rear cameras, the same number as the iPhone 12 Pro Max and one fewer than the Samsung Galaxy S21 Ultra or OnePlus 9 Pro, but quantity doesn’t necessarily equate to quality when it comes to smartphone photography – far from it in many cases. These are 50MP f/2.0 main, 48MP f/2.2 ultra-wide and 48MP f/4.1 periscope cameras, with the latter hitting 5x optical and 120x digital zoom. There’s also a 20MP f/2.2 front-facing snapper. 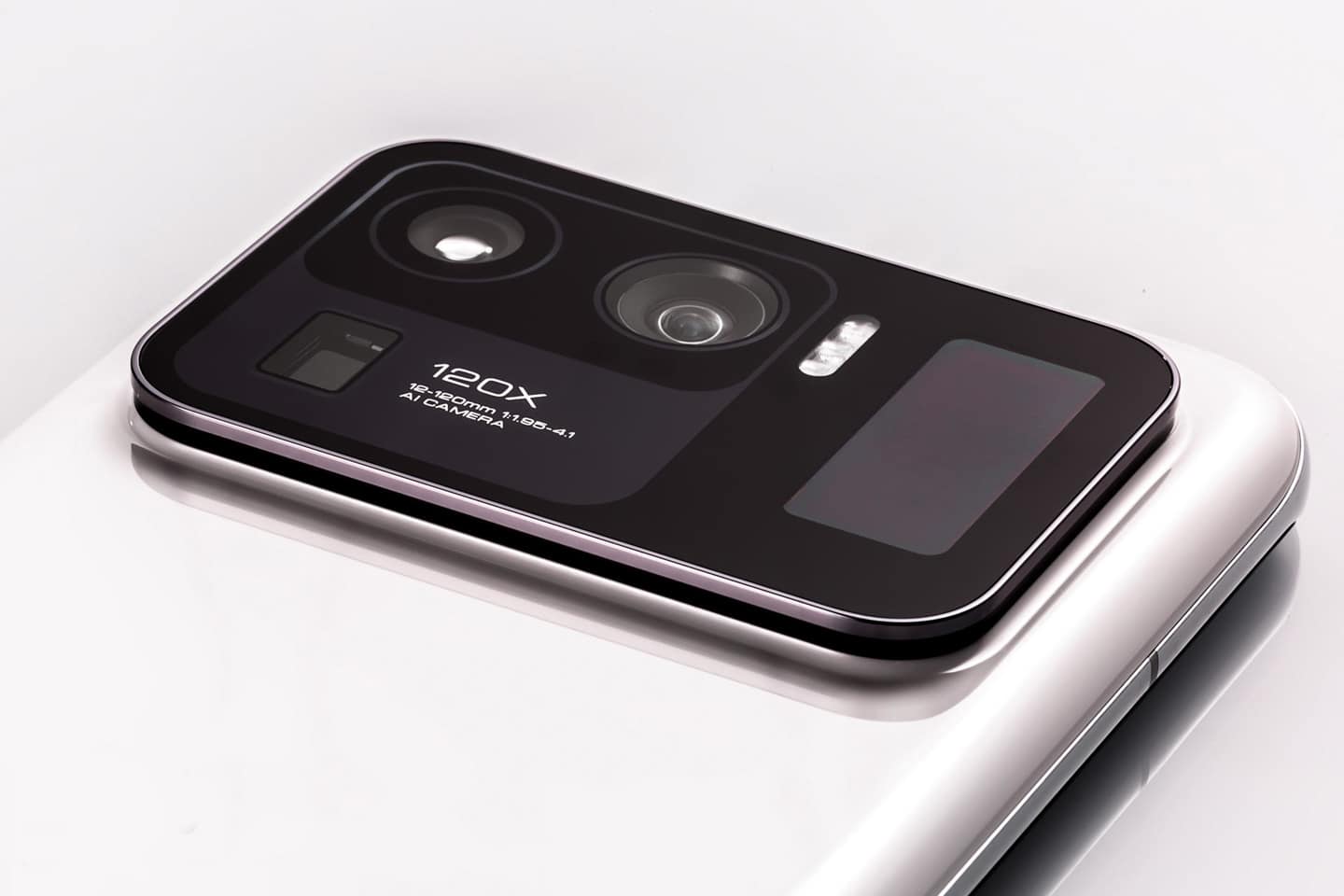 Pictures taken on the main camera look fantastic – they’re bright and bold, with natural-looking depth effects and lots of detail. Xiaomi’s choice to prioritize a large sensor size over high resolution, as in the Mi 11 with its 108MP snapper, clearly pays off here. In well-lit settings especially, but also to an admirable degree in low-light conditions, images were sharp, and exposure was handled well too. It’s hard to fault photos taken with the main camera. 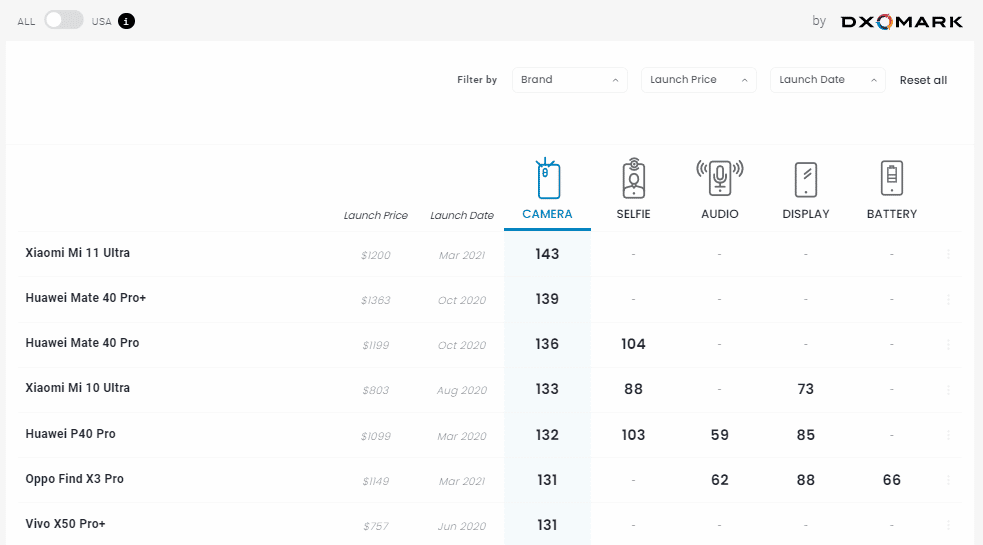 Round the front, the selfie camera is pretty good. Pictures were bright and detailed, and Portrait mode balanced the highlights and shadows well, although by default it blurred the background a little too much. However, we found ourselves using the main cameras for selfies, and using the rear screen viewfinder to compose them – this way the depth effect looked really natural, colors looked bold, and pictures were high-res enough that we could crop in if we needed to. Video recording is available at up to 8K at 24fps or 4K up to 60fps. The video recording uses the main camera. Video shot on the Mi 11 Ultra was some of the best we’ve seen captured on a phone. The device heated up a little when shooting, but this was only an issue with longer takes.

Like most top-end Android phones of 2021, the Xiaomi Mi 11 Ultra uses the powerful Snapdragon 888 chipset, which is paired with 12GB of RAM. Thanks to these internals the phone is powerful enough for all kinds of tasks – at least that’s what our day-to-day experience suggested.

When we ran the Geekbench 5 benchmark test, the phone returned a multi-core score of 3519, which puts it roughly on a par with the Mi 11 at 3569 and the iPhone 11 Pro Max at 3424. However, our testing process involves running the test three times and calculating an average score, so we ran the test again, and we found that the score dropped suspiciously. 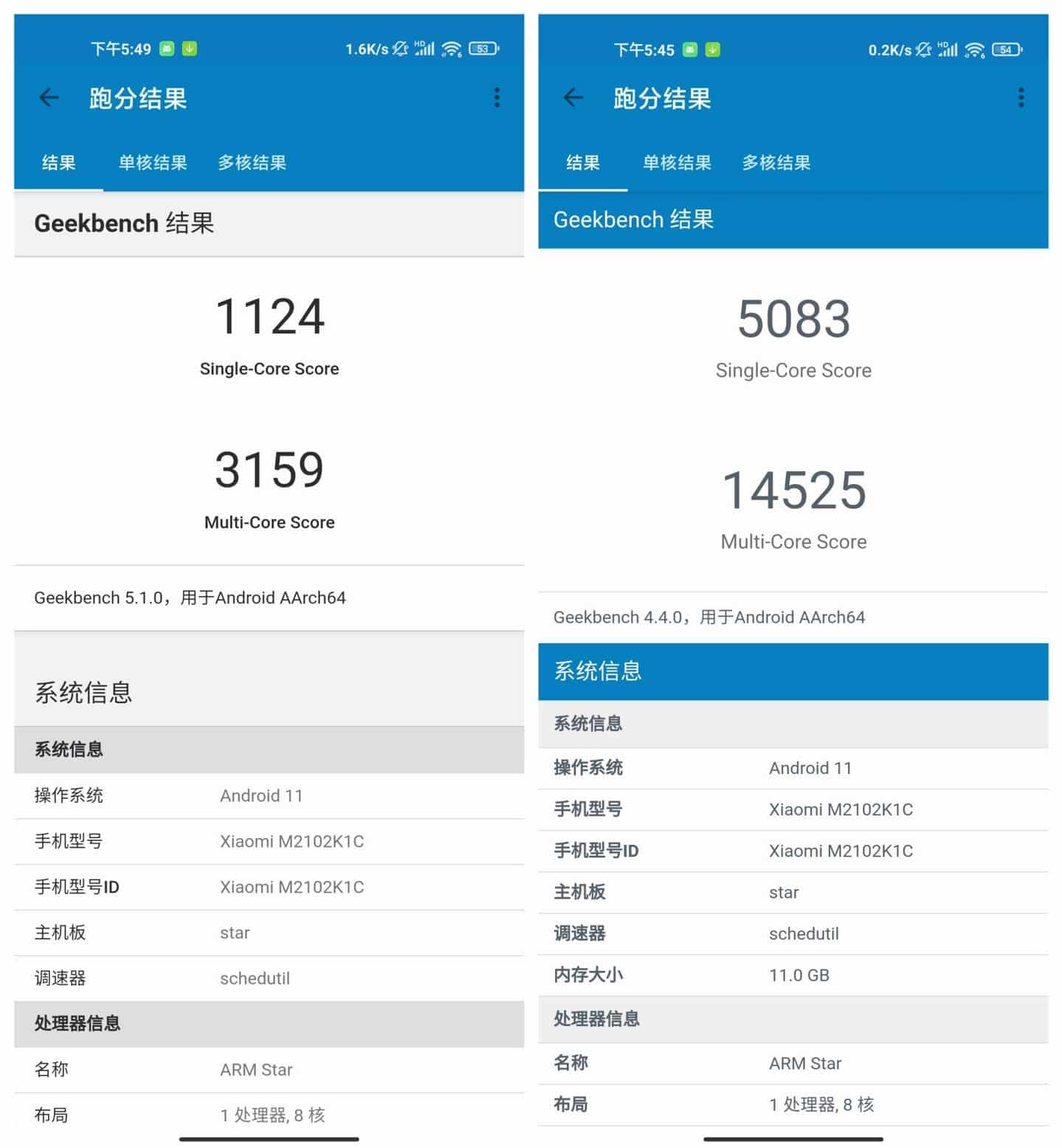 Is this a software bug? We can’t tell for sure, but we don’t think so. In our month with the phone we found that it seemed to heat up very quickly .The phone became really hot during the process of running the Geekbench 5 test, which is likely to blame for the diminishing results, and we’d guess from this that it has pretty poor heat management.

The Xiaomi Mi 11 Ultra runs Android 11 with the MIUI user interface laid over the top. As we’ve seen on other Xiaomi phones, MIUI can be great and annoying in equal measure. It’s fairly good-looking, and has quite a few customization options to allow you to personalize the look of your phone. However, MIUI is also fairly buggy . There are visual glitches in the swipe-down menu, notifications are sometimes sent multiple times. You can get ‘phantom’ notifications which make your phone buzz and light up, despite no message having been received. Other issues include MIUI’s bloatware, or pre-installed third-party apps that you’ll likely find yourself deleting. And a security scan pop-up that appears when you install a new app, and which can appear in front of whatever else you’re doing.

The Redmi K40 comes with a 6.7-inch OLED full HD display with a resolution of 1080×2340 pixels. It carries a high refresh rate of 120Hz and gets Corning Gorilla Glass 5 protection. The quad cameras are placed at the top-left in L-shaped form. The dual front cameras go inside the punch hole on the front. The phone is made of glass and metal at the back. 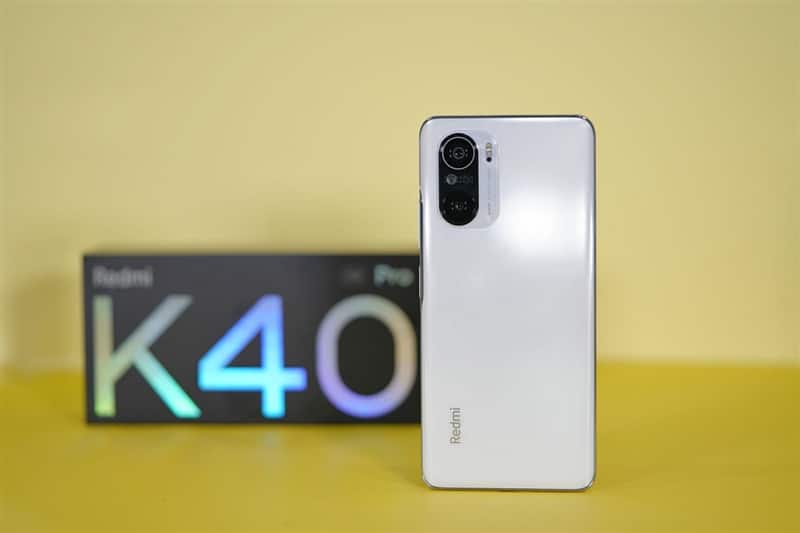 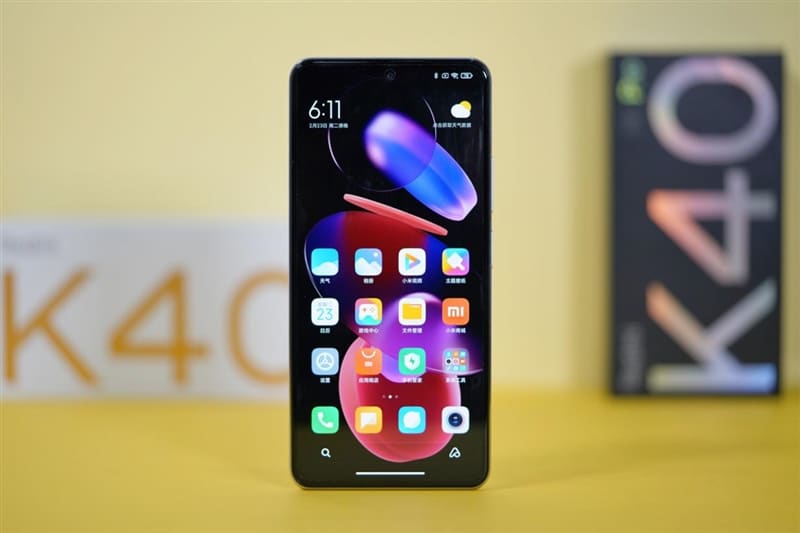 You get quad rear cameras which comprises of 64MP primary wide sensor, 8MP ultrawide sensor, 5MP macro sensor and 2MP depth sensor. On the front you get dual 16MP and 8MP cameras for wide angle selfies. Both the main cameras on the front and back can shoot 1080p HDR videos at 30FPS. The main module is built around the Sony IMX582, which is a couple of generations behind. It’s a relatively small 1/2” sensor with 48MP resolution and 0.8 µm pixels, sitting behind an f/1.8 aperture. There is also an 8MP secondary camera and a 5MP tele-macro camera. Video recording is capped at a disappointing 4K/30 fps. However the S870 chipset is capable of 8K/30 fps (and 4K/60 fps). The slow-motion mode and the selfie camera match the other two phones. 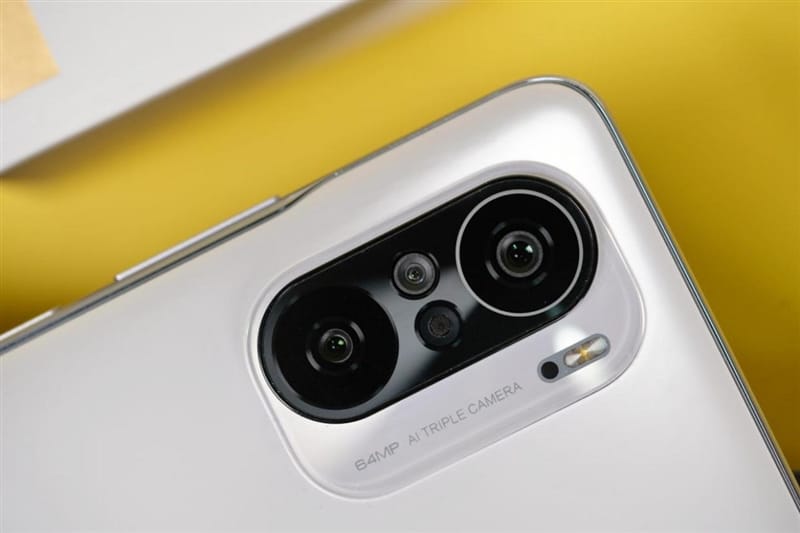 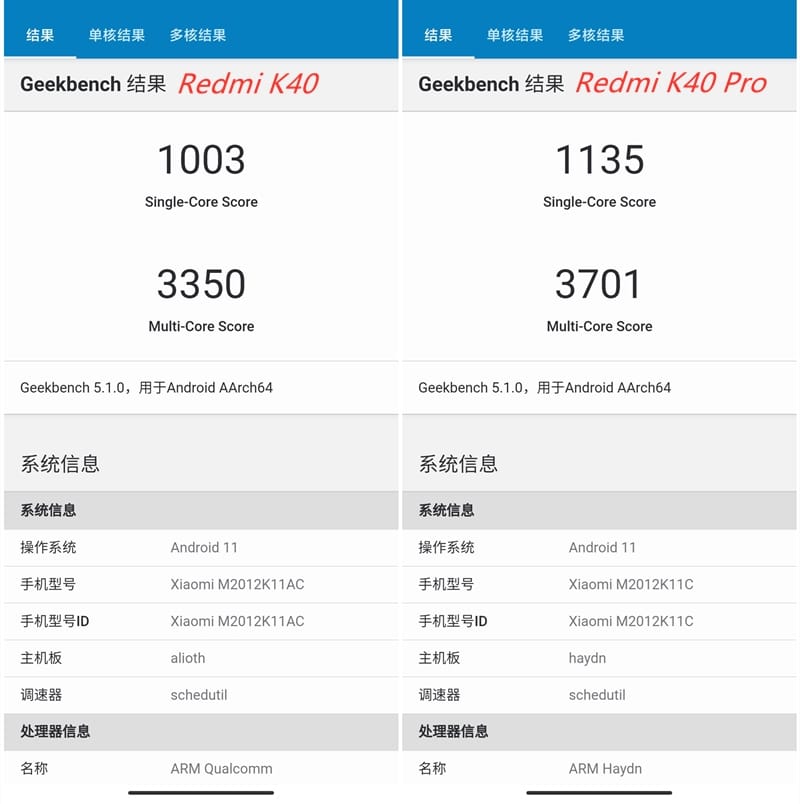 The main change is the use of an enhanced Kryo 585 CPU core. One of the super-large cores has a clocked frequency of up to 3.2GHz, which is 100MHz higher than that of the Snapdragon 865 Plus and 360MHz higher than that of the Snapdragon 865. The Snapdragon 870 chip is manufactured with a 7nm process and integrates a large core + three middle cores + four small core CPUs. The GPU adopts Adreno 650, equipped with FastConnect 6800 wireless subsystem, Spectra 480 ISP, and Hexagon 698 DSP. And it can be externally connected to Snapdragon X55. The 5G baseband supports 5G Sub-6GHz. Millimeter-wave frequency bands are truly facing the global market, with a maximum download rate of 7.5Gbps. The maximum upload rate is 3Gbps. It supports the fifth-generation AI engine, with 15 trillion operations per second and lower power consumption.

Nowadays, smartphone batteries are getting bigger and bigger, and the charging power is getting higher and higher. The latest flagship smartphones have basically broken through the 50W fast charge, which can charge the phone in 1 hour. As said, the Redmi K40 comes with a battery capacity of 4520mAh and supports 33W charging power. But the manufacturer said that its charging speed is comparable to 55W and 66W. The Redmi K40 series uses MI-FC fast charging technology, a new generation of high-efficiency charging IC, MMT pole ear center point core and other technologies. The charging speed surpasses many higher power fast charging on the market. The official video released by Redmi shows that it only takes 50 minutes and 12 seconds to fully charge the Redmi K40. It is even 28 seconds faster than the friend’s 66W.

In the sub-flagship category, the Redmi K40 has only a couple of rivals. But it’s not capable of fighting against its sibling, which is a top-end smartphone coming with an innovative design and all the latest technology. So these handsets are from different weight classes.