Comparing the Xiaomi Mi 11 Pro with the Apple iPhone 12 Pro Max would potentially help you understand how Xiaomi’s top-end smartphone stands against Apple’s Pro Max iPhone and which one should you buy.

First of all, when comparing the appearance and design, the Mi 11 Pro doesn’t really bring improvements over the original model. On the contrary, the body of the Pro feels a bit bulkier with a thickness of 8.53mm and a weight of 208 grams. So if you are really concerned about the weight, the Pro may disappoint you because the two phones feel very different when holding in the hand. 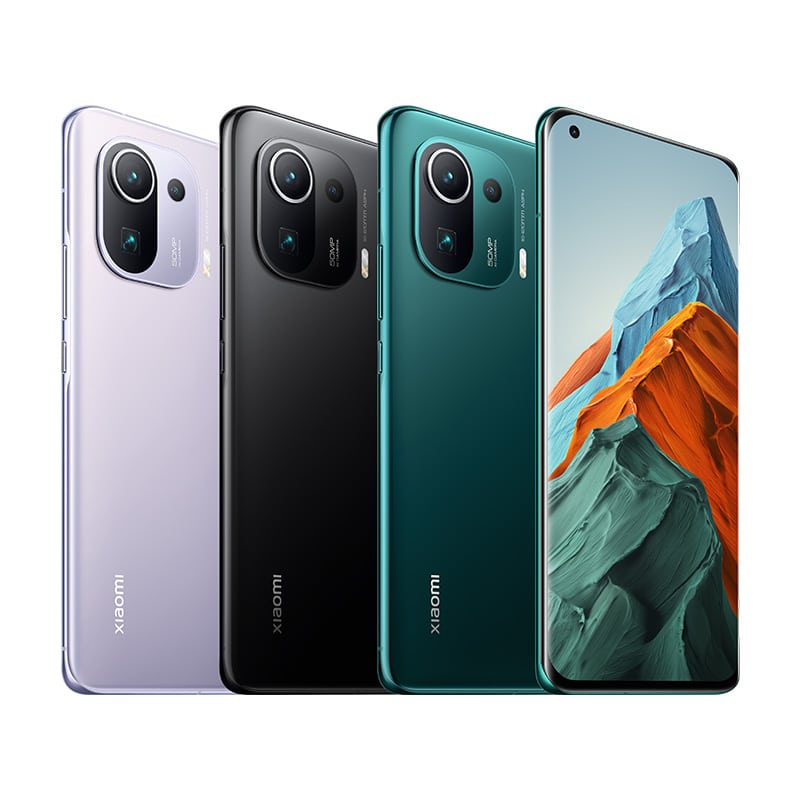 Apple changed some iPhone design characteristics in its lineup last fall. It has the same edge-to-edge screen with a notch, but an old design paradigm returned: flat sides. The last iPhone with that design was the original iPhone SE. This follows the iPad Pro, which also moved to a flat-sided design in its third-generation. The handset ships in four stainless steel finishes, including graphite, silver, gold, and pacific blue. 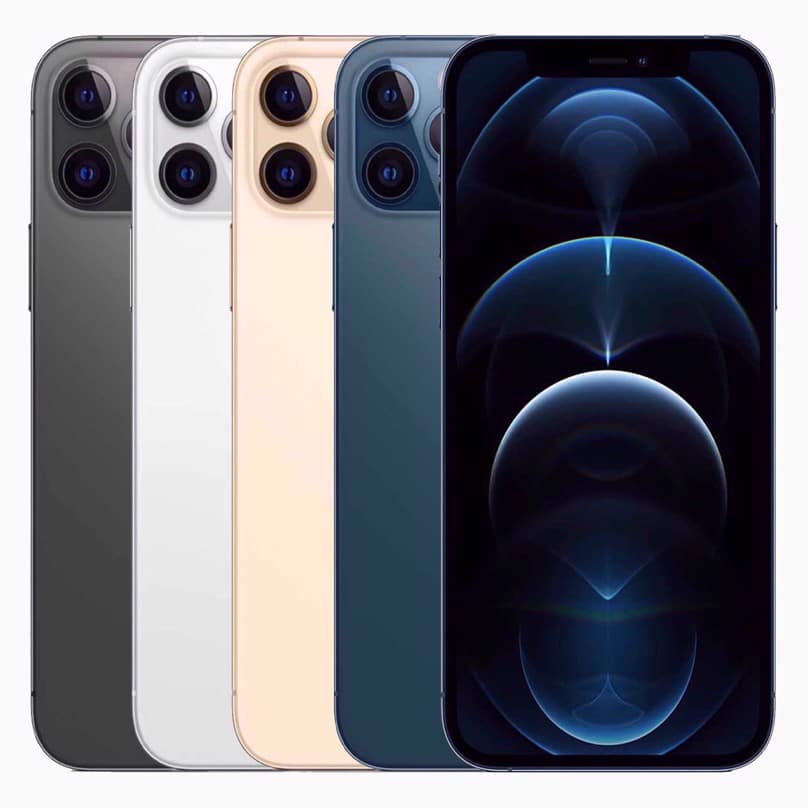 Apple slightly reduced the borders in the new models. In this max-sized model, that makes for a slightly bigger device with an even bigger display size. Compared to the iPhone 11 Pro Max, the iPhone 12 Pro Max is 1.8% taller and 9.4% thinner. The new model is also slightly heavier than its predecessor.

We want to remind you what’s reserved on the Pro model from the standard version. For example, the excellent display shared by both the Pro and standard models is still one of the best phone displays. So it seems like a reasonable decision. And the performance-related hardware is shared by both the phones, like the Snapdragon 888 chipset, accompanied with UFS 3.1 storage and LPDDR5 memory. The latter is also one of the best combinations that you can find among Android smartphones in 2021. 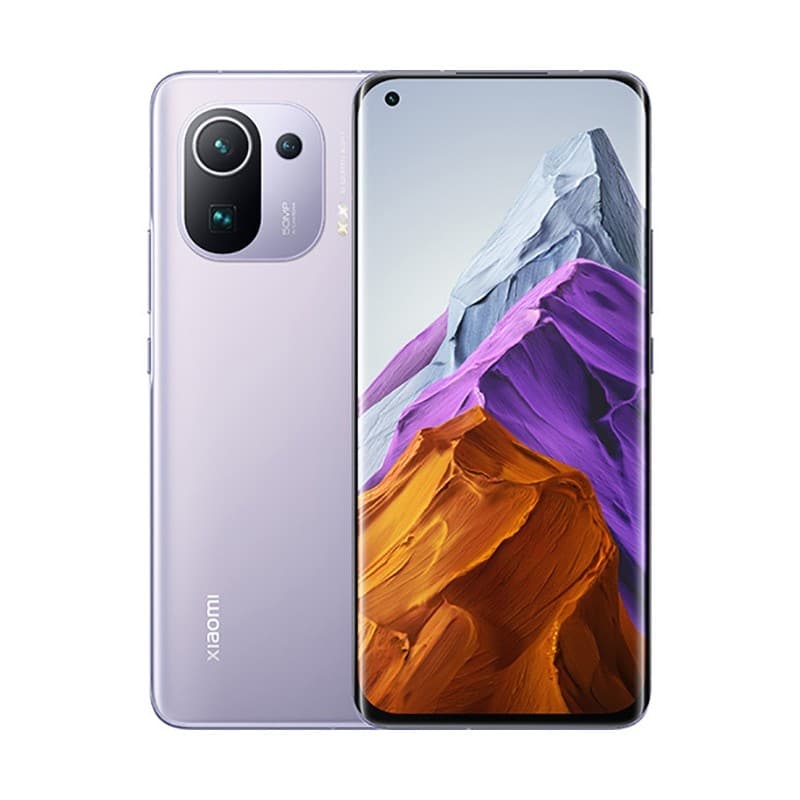 There is a 6.81 inches and it uses an AMOLED four-curved full screen with a resolution of 3200×1440, a pixel density of 515PPI, a refresh rate of 240Hz, a touch sampling rate of 480Hz, a color gamut covering DCI-P3. The latter also supports 1 billion color display, HDR10+, Dolby In Vision, each piece has been color-calibrated before leaving the factory. The color accuracy is JNCD≈0.38 and △E≈0.41.

It uses the latest E4 luminescent material with a brightness of 900 nits under strong light, a peak of 1700 nits, and a DisplayMate A+ rating. Moreover, the surface of the screen have Corning Gorilla Glass Victus. The top and bottom have two built-in grip sensors to support intelligent anti-inadvertent touch and it supports optical fingerprint recognition under the ultra-thin screen.

All four iPhone models use OLED Super Retina XDR displays this year with the pro-level models receiving more advanced displays. The larger pro-level model increases from 6.5 inches to 6.7 inches this generation. The screen size increase further differentiates it from the 5.4-inch iPhone 12 mini at the bottom of the lineup. For 2020, Apple has also ensured the Pro models have superior video quality, with the inclusion of support for 10-bit color depth imagery in HDR video. 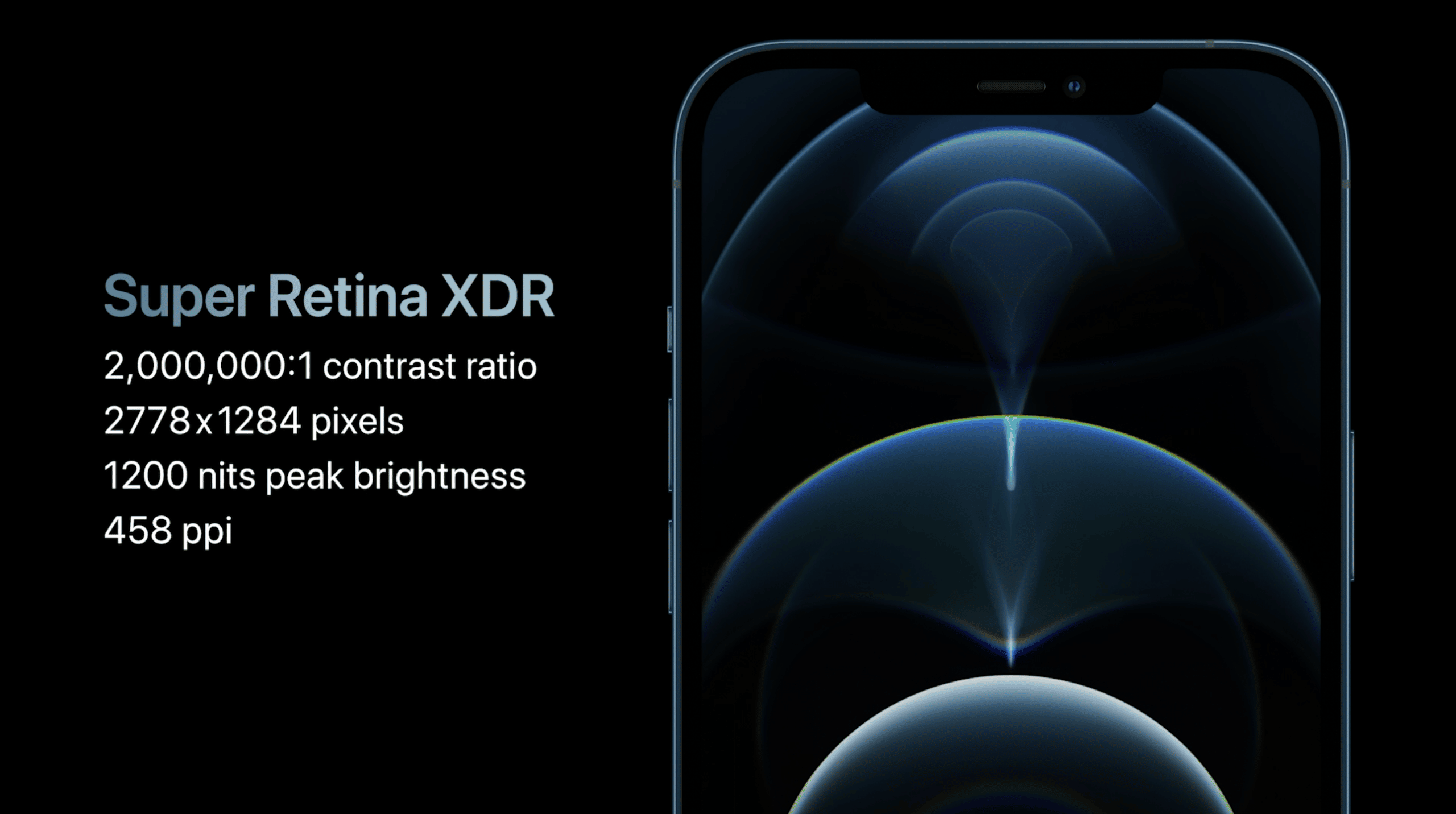 The wide-color P3 screens also boast a 2-million-to-1 contrast ratio, 800 nits maximum brightness, 1,200 nits of max brightness for HDR, and TrueTone support. All the iPhone 12 models use Apple’s Ceramic Shield front cover, which the company developed in partnership with Corning. It adds “a new high-temperature crystallization step that grows nano-ceramic crystals within the glass matrix, increasing drop performance by 4x.”

But the most significant upgrade in the Pro model is the rear camera setup. The main camera is upgraded to a top one featuring the Samsung GN2 sensor. The latter  is the biggest camera sensor that you can find on a smartphone right now. The Mi 11’s useless 5MP tele-macro camera does not make it to the Xiaomi Mi 11 Pro, and Xiaomi replaces it with an 8MP telephoto camera which supports 5-time optical zoom and up to 50-time digital zoom. 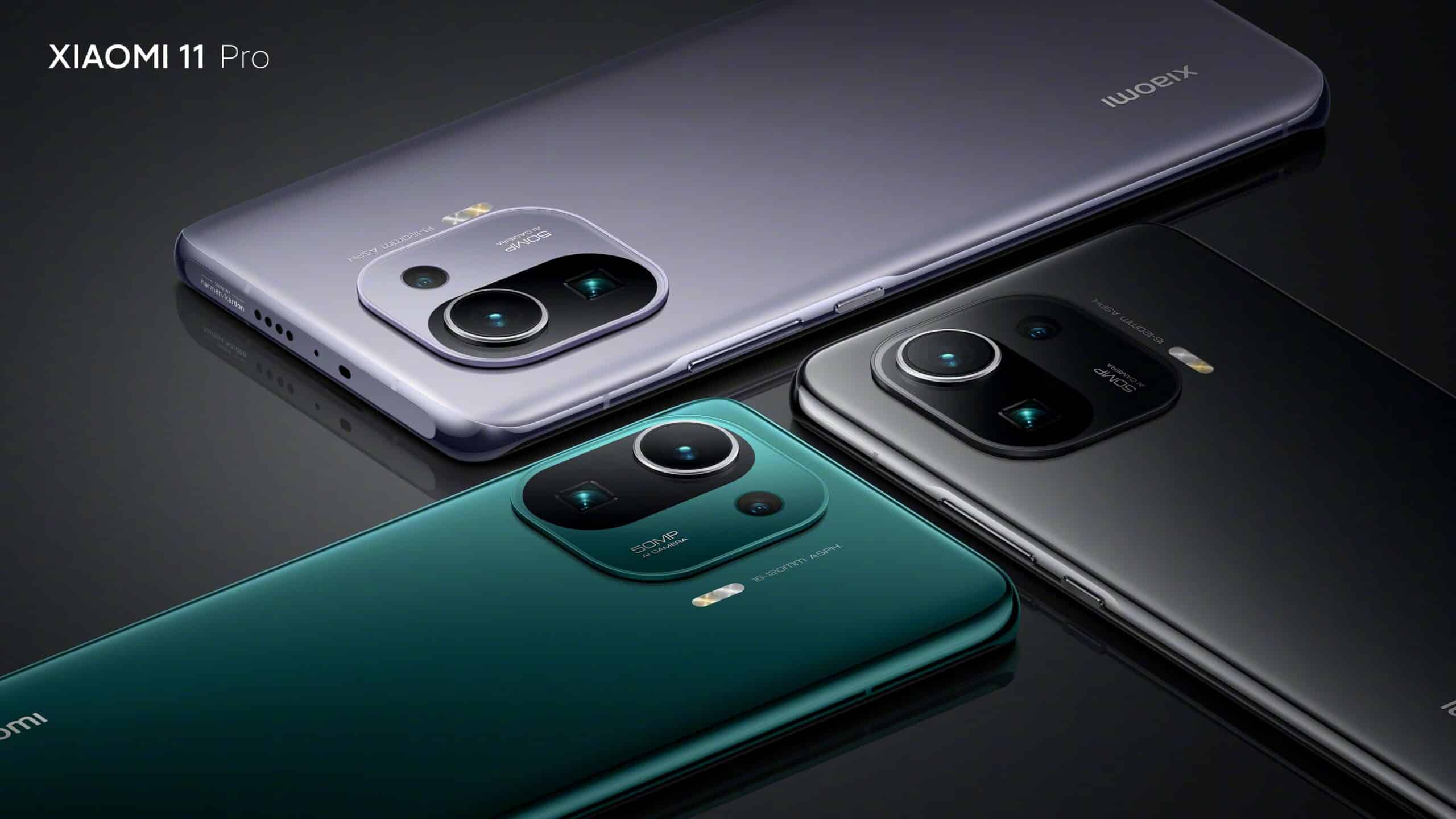 As for the wide-angle lens, Xiaomi didn’t do any changes with this 13MP one. So let’s check out what exactly we got and start with its main camera. Thanks to the larger sensor, generally the Pro’s samples were more excellent at delivering a higher-contrast image. At the same time, have better noise control over the dark areas. And if we look closely at their colors, it’s not difficult to find that the Pro model presents richer colors with natural transition.

From the samples shot during the day, it’s pretty easy to estimate their night performance. No doubt the Pro model’s larger sensor improves the overall night creation. It’s much easier to get a brighter image with better noise control and richer detail on the Pro model. And more importantly, the shooting experience is much smoother and faster than the standard Xiaomi Mi 11. Especially for extremely low-light conditions, the Pro still maintained excellent performance. Another significant upgrade is the optical 5-times zoom capacity. The exclusive telephoto camera of the Pro model works well. Although it only features 8MP resolution, the image is still much sharper and clearer than the digital zoom of the Mi 11. And the night mode also works well on the 5-times-zoom shooting, which greatly improved the overall brightness and stability.

Around the back, Apple has gone with the same camera arrangement as in 2019, with three 12-megapixel cameras covering Ultra Wide, Wide, and Telephoto ranges, with a 4x optical zoom in, 2x optical zoom out, and a 10x digital zoom in. Equipped with dual optical image stabilization, it has Portrait Mode and Portrait Lighting effects, a Night mode, Smart HDR, and Panorama features. The optical image stabilization has been upgraded to a DSLR-style Sensor Shift. Where the sensor moves but the lens does not, enabling the image to stay sharper. For longer exposures to be made that capture more light, even up to two seconds long when hand-held. It can adjust up to 5,000 times per second, approximately five times as many adjustments than similar systems used in the iPhone 11 Pro range. 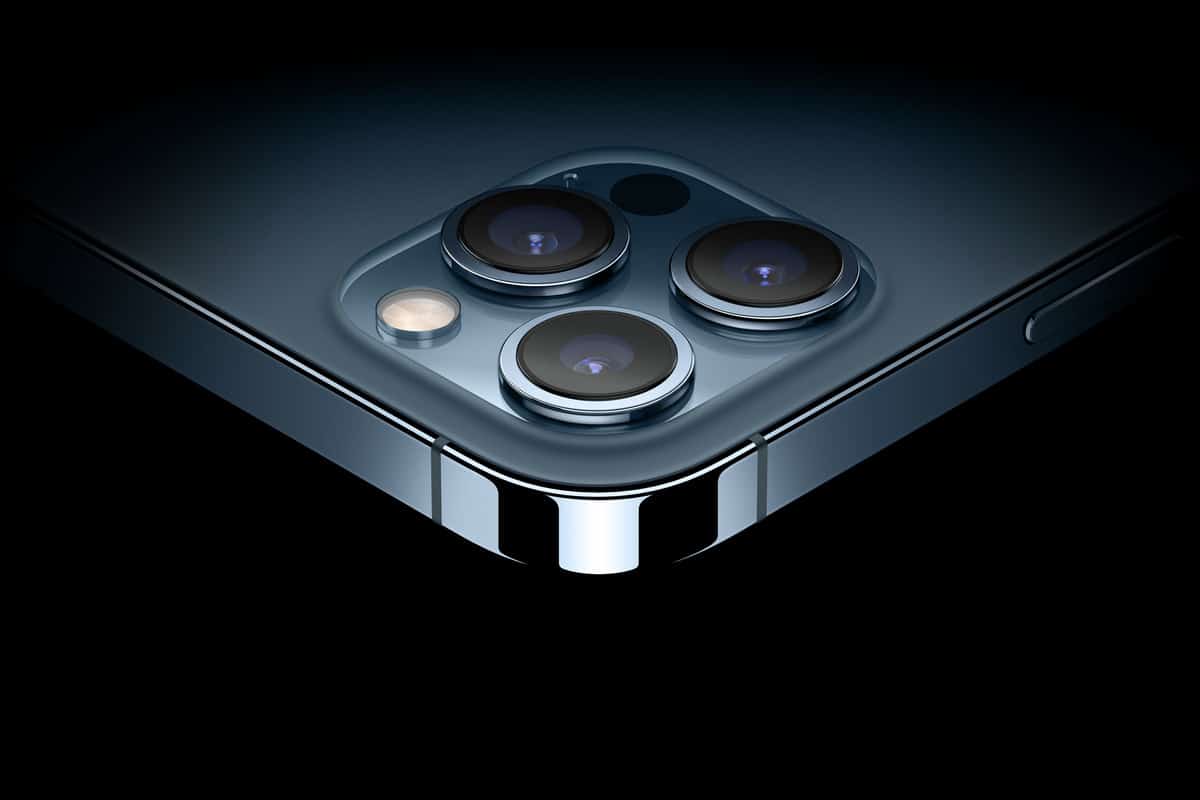 Apple also introduced Apple ProRAW for its Pro line, a new imaging format combining RAW photography with computational photography features like Deep Fusion and Smart HDR. This includes having full control over color, details, and dynamic range, all from the iPhone’s Camera app. Users can edit ProRAW images in the Photos app or third-party Raw editors like Lightroom.

Apple boosted video capabilities, including the ability to record in 10-bit HDR. This is the first iPhone to record in Dolby Vision HDR. Which users can edit on the iPhone and play through a compatible screen over AirPlay. It is able to do this even at 4K resolution at 60fps. It also supports 1080p slo-mo at 240fps, records stereo audio, and supports Audio Zoom. At the top of the screen is the standard notch and TrueDepth camera array. It can capture 12-megapixel images complete with Portrait Mode and Portrait Lighting effects. It offers 4K video recording at up to 60fps with cinematic video stabilization, 4k 30fps HDR with Dolby Vision, and 1080p slo-mo video at 120fps.

The solution of battery and charging is also upgraded on the Mi 11 Pro. The full-charge test only took us 37mins with the included 67W charger. And the wireless charging also got amazingly improved, which can provide up to 67W fast-wireless-charging efficiency. In the actual test, it took a few minutes longer to fully charge back the battery. About its 5000mAh battery life, the improvement is not so obvious.

As for the performance, there is no obvious improvement when compared to the Xiaomi Mi 11 as the Pro shares the same setup. On the contrary, the Mi 11 seems to perform better after getting continuously optimized in the last couple of months. In the benchmarks we tested, the results of the Xiaomi Mi 11 are slightly better than the Xiaomi Mi 11 Pro. For example, it gets a slightly higher score in Geekbench 5’s multi-core test; and takes a small lead in the new Antutu benchmark; then it  is slightly better in 3DMark’s GPU test. And our gaming-test results also support the fact that by far the  Xiaomi Mi 11 Pro didn’t have a ‘Pro’ performance, although Xiaomi claims it has an upgraded cooling solution.

Apple upgraded from 4G LTE to 5G in the next-generation iPhones. Qualcomm provided the modems this year since Intel has exited the 5G modem business. Apple may start making modems after acquiring the patents from Intel in a billion-dollar deal. However, the Apple-designed modems wouldn’t be ready until 2022 at the earliest.