The BMAX MaxPad i10 Pro is actually a budget entry laptop in a variety of Android tablets. The MaxPad i10 Pro is functional enough to meet the daily needs of its users such as browsing the web and watching anything on streaming services.

In terms of features, the BMAX MaxPad i10 Pro uses a 10.1-inch display with a resolution of 1920 x 1200 bringing you high contrast and a more vivid visual experience. The display offers clearer and more vivid image quality. The touch screen supports 10-point touch control, and the operation is more sensitive. In addition, it features two speakers that are responsible for playing back movies and videos together with a 3.5mm headphone jack. It runs Android 10 and has 64GB of expandable storage. At the same time, the tablet uses an LTE modem, Bluetooth 5.0 connectivity, dual-SIM, and a dual-band Wi-Fi modem.

As for other hardware specs, the MaxPad tablet sports a 6000mAh battery as well as a UNISOC T610 SoC. On the other hand, the tablet includes a 12nm chipset featuring an ARM Mali-G52 MP2 GPU, two Cortex-A75 CPU cores, and six additional Cortex-A55 CPU cores. It is also worth noting that the UNISOC T610’s CPU cores are capable of reaching 1.8GHz for reference.

On the front, the MaxPad i10 Pro uses a 2MP camera for video chats and selfies. On the rear, we have a 5MP camera. Further, the aluminum back has a gray color and a chic finish like all BMAX mini-PCs and notebooks. In addition, the bezel width on the display side is not narrow or common which also makes the tablet unique and modern. In order to make the operation of the tablet much easier and more enjoyable, the tablet supports face recognition. It allows you not to waste time unlocking the tablet in traditional ways. 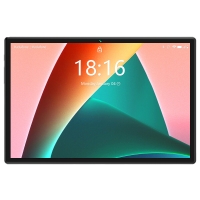 Gizcoupon Review
The BMAX MaxPad I10 Pro is functional enough to meet the daily needs of its users such as browsing the web and watching anything on streaming services.
Performance
9
Memory
8.7
Battery
8.8
Hardware
8.7
PROS
CONS

We track Bmax MaxPad i10 Pro for you and email you once the product dropped below your desired price.
Price Alert

Create a price alert for Bmax MaxPad i10 Pro