Product is rated as #215 in category Computers & Office

The Formovie P1 Laser Projector is small enough to hold in one hand. Moreover, thanks to its small dimensions, you can also put it into a pocket, creating the most portable laser projector category. The projector uses the blessing of ALPD® laser display technology that brings excellent performance in brightness and picture quality along with its slim and compact appearance.

The Fengmi P1 pocket laser projector uses ALPD laser display technology. It is the homologous display technology of the cinema ALPD laser hall. In addition, the main selling points of the latter are better light efficiency, higher brightness, and contrast. It is also worth noting that despite the fact that both of them have the same brightness, this laser projector is 30% to 50% smaller than the LED projector. On the other hand, at the same volume, the laser projector stands out with 2 to 5 times brighter brightness than that of the LED. The Fengmi P1 has a brightness of up to 800 ANSI lumens. Moreover, it can provide a clear picture in the range of 40 inches to 100 inches. Even small and portable devices can play the art of light and shadow on a large screen.

As a positioning ultra-portable laser projection product, the length, width, and height of the Fengmi P1 pocket laser projector are only 130mm x 80mm x 24mm, respectively. It is also worth noting that they are comparable to the size of common power banks. They are very suitable for smartphones. The small and light body determines its ultra-high portability. It is very light to hold in the hand. It is even easier to put it in a schoolbag. You can also use it to project a large screen on the occasions such as halls, share proposals with customers when negotiating, and gather with friends to watch games on weekends. The Fengmi P1 pocket laser projector makes projection easier. 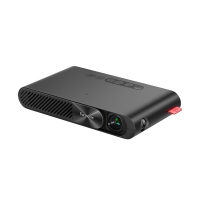 We track Xiaomi Youpin Formovie P1 Laser Projector for you and email you once the product dropped below your desired price.
Price Alert