Product is rated as #54 in category Computers & Office

Xiaomi, a Chinese tech giant, is known for manufacturing smartphones and other electronics. In 2017, the company stepped into the projectors market with its sub-brand Wemax and successfully gained users’ interest worldwide. Now the company is launching the new Xiaomi Youpin Fengmi Xiaoming Q1 SE Mini Projector with its other sub-brand Fengmi. Fengmi is also one of the top-rated projector companies with its laser projectors. Let’s check how this mini projector will help you with its features.

The design of the new mini projector from Fengmi is similar to the Wanbo projector. If you are looking for an entry-level projector, this Q1 SE mini projector will be the best option.

The overall appearance of the projector is sleek with a square shape. You can easily hold this compact size projector in one hand. Also, you can carry it along with you in your handbag. We see the square lens on the front, which is covered by the golden frame.

The projector’s screen size is 120-inches, and you can adjust it according to the distance. With a brightness of 150 ANSI lumens, the projector has a screen resolution of 1920 X 1080 pixels. Customers will have to make sure that they use the projector only in a dark environment.

This sleek projector arrives with the Xming Unique cooling system, featuring two twin turbo fans at the bottom. These fans ensure heat dissipation while keeping the noise to a minimum. 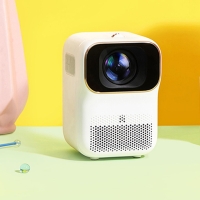 We track Xiaomi Youpin Fengmi Xiaoming Q1 SE Mini Projector for you and email you once the product dropped below your desired price.
Price Alert