Product is rated as #214 in category Computers & Office

The Fengmi 4K Cinema Laser Projector has been launched for the company’s global clients. The latest Fengmi 4K Projector features an 8mm ultra-narrow border and 8-point picture correction technology. Being a multi-featured small device, it’s a suitable product for home and office use. Moreover, the latest projector can provide brightness up to 1700 ANSI Lumens.

This laser probe features an elegant and handy design covered within the silver color body. Its outer layer comes with a glossy and sleek approach which provides a smooth feeling to the user. The Fengmi 4K smart projector utilizes 0.47” DMD display technology and ALPD light source for providing its brilliant performance. The Xiaomi Fengmi 4K Laser Projector can also project a picture up to the size of 80-150” and throw a ratio of 0.23:1.

Moving to the projection, this projector has a native resolution of 4K which is four times the Full-HD resolution. Moreover, this means you get a sharp and clear image even on a 150-inch maximum projection display. Like most laser projectors, it uses theTexas Instruments (TI) custom DLP digital light processing technology for clearer and brighter picture performance with rich and realistic details.

In terms of dimensions, the projector occupies a space of 456 x 308 x 91mm and weighs around 7.5 kg. So, it is slightly larger and heavier than Wemax ONE PRO, but smaller than the Mi laser projector. With the smart feature to connect with MIUI TV, the Fengmi 4K Projector houses a 2 GB DDR3 RAM configuration along with the 64 GB internal storage space for keeping your videos and pictures safe.

The concept which is also the uniqueness of Fengmi 4K Cinema Laser Projector is the principle of diffuse reflection. This provides eye protection as it reduces the blue light. It also provides an anti-glare display for no radiation and visual fatigue of the human eye. This is what makes this projector different from other projectors out there in the Chinese market. There’s an IR sensor on both sides of the projector which decreases the brightness of the projector to a minimum if someone passes by, to avoid visual damage. 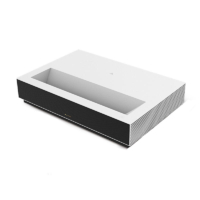 Gizcoupon Review
The Fengmi Laser Projector is a good product for home and office use. The selling point is the diffuse reflection which provides eye protection as it reduces the blue light.
Design
8.5
Image
9.4
Performance
8.9
Operation
8.9
Control
9
PROS
CONS

We track Xiaomi Youpin Fengmi Laser Projector for you and email you once the product dropped below your desired price.
Price Alert