Product is rated as #9 in category Computers & Office

When a device connects two or more networks, it is called a router. The purpose of a router is to connect different machines to a single network enhancing productivity by connecting multiple users to the same internet connection. Unlike other networking devices, a router can efficiently determine the path of source and destination. A routing table does all the routing of packets. If a server stops or a cable defect affects one network, it will not affect the router services and other networks. The router separates the affected network, whereas the unaffected networks remain connected. Redmi AX5400 Router Wi-Fi6 Enhanced Version is Wi-Fi 6-capable gadget, and it can deliver speed up to 5.4 GB. The AX5400  router can connect to up to 248 devices.

Routers can usually be integrated with modems and ensure that Wireless Access Points are provided to create small networks. Setting up and controlling the smart AX4500 router is easy, and you can do it with the Mijia app.

The new Xiaomi enhanced edition router is similar to the vanilla version of the Ax5400 router. On the top, we see the Redmi branding with the six antennas on the sides, and on the front, we can see the branding WiFi 6 router Ax5400. And in the box, the router comes with the power adapter, network cable, and router. It is easy to install the router on your own, also you can call the experts to help you.

The Redmi AX5400 Router Wi-Fi6 Enhanced Version runs on Qualcomm IPQ5018 routing chips along with six antennas which help in providing high-speed internet. The routing chips of the AX5400 will let the users attach 248 devices to the router simultaneously. The dual-core Qualcomm IPQ5018 SoC with the 512MP RAM makes the router about 20% faster. And also, it increases the independent NPU by 80%.

Users also have the option to control the router through their mobile app (MI WiFi app). Here parents can adjust the parental controls according to their requirements. 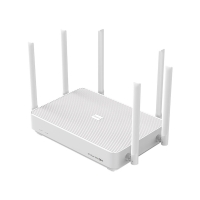 We track Xiaomi Redmi AX5400 Router Wi-Fi6 Enhanced Version for you and email you once the product dropped below your desired price.
Price Alert