Speaking of speed, the scooter maintains 25 kilometers per hour of maximum speed, although its engine is more powerful than that of the conventional model. On this occasion, we have an electric motor with a power of 250W and a maximum power of 500W. According to Xiaomi, that’s enough to climb slopes of up to 14% incline.

Regarding autonomy, the device remains at the theoretical maximum of 30 kilometers on a single charge. With the Eco mode, the speed is reduced and, theoretically, the maximum distance should be increased. In the same way, you can activate a maximum performance mode that not only reduces the range but increases the speed up to 25 km / h. Be that as it may, when the battery runs out, it will take five hours for it to fully charge.

The scooter is made of an aluminum alloy that, according to Xiaomi, is 1.3 times lighter than steel. It weighs 12.5 kg and supports up to 100 kg of load. It is also worth noting that the brakes have a regenerative braking system, so the battery will recharge slightly with braking. The brake consists of a 120mm disc and E-ABS. 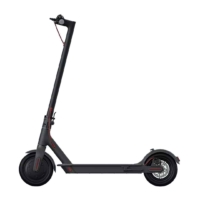 We track Xiaomi Mijia 1S Electric Scooter for you and email you once the product dropped below your desired price.
Price Alert