The Wltoys 124018 RC Car comes in a desert-truck look. It is a 1/12 scale off-road 4WD RC car that you can control via radio. It has some similarities with the already successful 124019 and 144001 models, but of course, there are several differences that are definitely worth mentioning.

First of all, the Wltoys 124018 comes in a completely different appearance. It features a single-piece vacuum-formed polycarbonate body. The body allows users to quickly remove and fix it with a couple of body pins. On the other hand, it consists of a plastic tube frame that directly screws to the chassis at multiple points with molded, painted polycarbonate ‘panels’. The latter makes the car much more intricate. At the same time, it means that the body is non-removable. However, you can easily fold the cab which fixes down by using 2 body clips. There is enough space to take the battery and turn the switch. One of the key features of this car is the ability not only to effectively keep water and dust out but also to keep heat in. Thus, if you need to maintain, you should remove over a set of screws to access the inside.

As for the bumpers, both the front and rear ones are way more notable than what we have found on the 144001 and 124019. This doesn’t mean that they offer better wheel protection. No. They are just higher and integrate with the body better. So most likely they can avoid many obstacles and not hit something and stop. Thus, we can consider it a notable improvement over the 124019.

The wing of the car is made of plastic, which has serious advantages over the vacuum-formed polycarbonate found on the 124019 and 144001 as well. Moreover, it makes it much more durable.  We cannot fail to mention that it is mostly there for looks. However, the angle that it is mounted on is unlikely to offer much in the way of downforce. 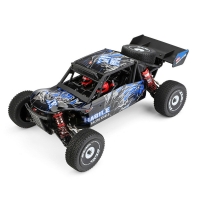 Gizcoupon Review
The Wltoys 124018 RTR upgraded car has got many improvements. Now, it is more durable, and functional. There is an improvement over the vacuum-formed polycarbonate on the 124019 and 144001 as well.
Motor
8.8
Battery
8.7
Design
8.7
Quality
8.5
PROS
CONS

We track Wltoys 124018 RC Car for you and email you once the product dropped below your desired price.
Price Alert