Product is rated as #10 in category Mobile Phones
Ulefone
Recommended

Ulefone is the last of the big three rugged smartphone vendors that unveiled a flagship smartphone Ulefone Armor 7 based on Mediatek’s P90 chipset and a 48-megapixel rear camera.

No real surprise here; the Armor 7 sticks to the tried and trusted, classic 4+4 rugged smartphone template. Four long sides, four rubber vertices for added protection. Not much evolution from a design perspective. The most notable change happens at the back where there’s a very smooth plastic plate rather than the usual rubber cover.

A front-facing camera sits bang in the middle of the top bezel in a water drop setup. There are no permanent capacitive system buttons that may divide opinions and no status lights (except for the battery status).

The Armor 7 is one of a handful of rugged smartphones on the market that use a Mediatek P90 chipset. This Helio part was unveiled back in 2018 and sports six slower cores and two faster cores, paired with a PowerVR GM 9446 GPU. It offers Cat-13 150 Mbps upload and Cat-12 600 Mbps download, Dual 4G SIM with Dual VoLTE standby mode plus Bluetooth 5.0, 802.11ac wireless connectivity, and an NPU. Ulefone added 8GB of DDR memory with 128GB onboard storage. A microSD card slot is available but you will need to sacrifice a SIM card to use it. When it comes to the camera subsystem, the Armor 7 uses three Samsung rear cameras; a 48-megapixel one, a 16-megapixel night photography one, and an 8-megapixel telephoto lens with a 10X zoom. It can also capture 4K videos.

The display was already covered by a screen protector when we picked it out of the box and we were surprised at how easy it was to scratch; you can of course remove it but decided to keep it in place especially as it was oleophobic. 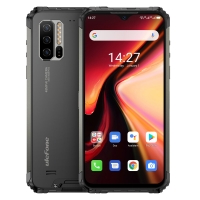 Gizcoupon Review
The Ulefone Armor 7 is a rugged smartphone with a number of surprising features.
Design
7.9
Performance
8.6
Operation
8.3
Features
8.6
PROS
CONS
We track Ulefone Armor 7 6.3" 8GB/128GB - Gizcoupon for you and email you once the product dropped below your desired price.
Price Alert