Product is rated as #223 in category Bike & Scooter

The Fiido D11 arrives in a large rectangular box that makes you think three things. There’s going to be some assembly required, it’s unlikely to have large wheels, and that it should be quite light.

In fact, assembly is minimal, requiring just the unfolding of the frame, securing the clasp on the cross beam to hold it all firmly in place, then doing the same for the handlebar column. The only need for the included tools is to attach the pedals. The final part of the process is to slide the saddle column into its slot and fasten it in place with the quick-release clip.

The seat post hides a nifty feature: it’s also home to the rechargeable battery that powers the Xiongda brand 36V, 250W motor. Just below the saddle itself are the charging port, power button, and rear light, plus the cable that connects the battery.

With everything set up, the Fiido D11 is a good- if slightly odd-looking machine. With no chainstays, you’d think it would flex and wobble, but it’s surprisingly rigid overall.

The slate blue and black color scheme gives it a smart and understated aesthetic. Some of the weldings spoil the appearance though, due to its rather industrial look. As well as the rear light, there’s also a front one, but no mudguards to keep your office wear pristine.

The Fiido D11 is a comfortable ride when on smoother surfaces. The saddle didn’t feel like it was trying to carve new crevices into my body, unlike some other bikes we have tried. And the seated position is one that could certainly suit an afternoon’s leisurely cycling or a commute from the train station to the office.  While on the roads, the ride was pleasant enough, with a few rattles here and there. As with any new bike, there will be riding in a period where the mechanics settle. So if you do purchase a D11 then be prepared to give it a quick check and tighten up after a week or two’s riding. 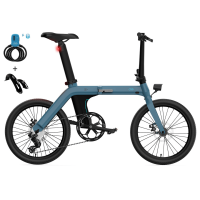 Gizcoupon Review
If you want a foldable bike for commuting from the train station to the office or simply prefer to pop around town without having to expend too much energy, then the Fiido D11 is an excellent option. Should your adventures take you into more rugged terrain, then it can lose its appeal rather rapidly. Stick to the roads and you’ll be very happy.
Performance
8.1
Design
9
Operation
8.1
PROS
CONS

We track Fiido D11 Folding Electric Bike for you and email you once the product dropped below your desired price.
Price Alert