Product is rated as #271 in category Computers & Office

The Creality 3D® Ender-5 Plus 3D Printer Kit is often called an intermediate model between the Ender 3 and the CR20 of the same manufacturer. The manufacturer itself likes to call it “the next step in the development of more economical 3D printers”. In some points, the Ender 5 does justice to this motivated advertising slogan. Thus, the assembly of the 3D printer can be realized very well within one hour on the basis of the assembly instructions – experienced users create the assembly even faster. The Ender 5 also has some interesting technical features, such as the patented MK-10 extruder.

Since this 3D printer has a lot of individual parts that have to be assembled by hand, the construction of the machine is not quite as quick. Those who have not yet dealt with this technology should plan 1 to 2 hours for the assembly.

The individual parts are packed separately. Screws, nuts, and other small materials, but also the tools are packed in separate small bags. In contrast to the predecessor model Ender 3, the power supply has to be mounted at the back of the Z-axis and not externally. The bottom, which has the shape of an “H”, seems a bit unusual to us. It consists of rectangular screwed aluminum profiles with a thickness of 40 x 40 mm. Both the base plate and the hot end were delivered pre-assembled.

In terms of design, the Ender 5 Plus is bigger than the previous model. Like the old 5, the Plus has a gantry design, but to compensate for the much bigger build volume. Also, the bed is mounted on four rods and two lead screws instead of two rods.

The Ender 5 sub-series of printers use a Gantry design, with the print head arranged at the top of the printer.

Each axis has a dedicated stepper motor. The Y-axis motor drives both belts at the same time. This results in an overall smoother movement and fewer layer shifts. The Z-axes are mounted in the middle of the bed with a large 8-mm-rods stabilizing each side.

or the Ender 5 Plus, Creality threw in an Antclabs’ contact-triggered BLTouch proximity sensor. It ought to assist you in the bed-leveling process: alternative, you still can level the bed by hand. 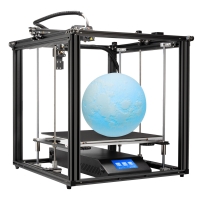 We track Creality 3D® Ender-5 Plus 3D Printer Kit for you and email you once the product dropped below your desired price.
Price Alert