Product is rated as #217 in category Computers & Office

When it comes to the 3D printer corridor, Creality is the name to hit the mind first. Now, the brand has managed to occupy the space in the market for its new Creality CR-10 V2 3D printer. It is said to host several enhancements over the previous generation equipment in the famous CR 10 Series.

Creality is the world-recognized brand to manufacture 3D printers. Shenzen, a China-based firm also offers various other related services such as 3D printer distribution, 3D printing software research, high-precision 3D printers, and other stuff. In the meantime, Creality’s CR 10 Series is popular across the globe as it contains high-profile 3D printing machines for the best outputs. The new CR-10 V2 is the next update to cover more features in the same pack.

As per the qualifications of the new printer, it has changed its design to gain better and stable performance by lowering down the vibrations and adding a V-profile module. Further, this particular module reduces sloshing while the machine is in motion. The Creality CR-10 V2 3D printer also achieves an upgraded heat dissipation system. It features a two-way sphenoid cooling nozzle to disperse the heat in both directions.

Moreover, the latest Creality CR-10 V2 printer provides ultra-quiet working due to the compression resistance and noise reduction technologies. The strong adhesion also improves the silicon glass printing strength. It is an intelligent device as it gets powered off automatically when not in use. Likewise, it also resumes the work from the same stage if any power interruption occurs. 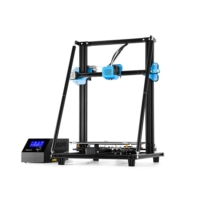 We track Creality 3D CR-10 V2 3D Printer Kit for you and email you once the product dropped below your desired price.
Price Alert