Product is rated as #185 in category Consumer Electronics
Mecool

This Mecool KM2 TV Box is a device manufactured by Skyworth with Netflix certification within the Hailstorm program. Mecool brand has remarked and performed its distribution. A device with a fairly conventional design, in the rear area we have Ethernet 10/100 connector, AV jack, HDMI 2.1, SPDIF, IR extender, ON/OFF button, and power connector. On one side we have a USB 3.0, another USB 2.0, and a MicroSD reader with a maximum capacity of up to 32 GB.

It also has Bluetooth remote control that has a microphone for Google Assistant. At the front, it has a status LED, some keys that have no direct use, but we can remap for other functions. The IR emitter of this remote control has no practical use, we have no settings in Android to configure it.

This TV-Box has a Wifi AC + Bluetooth 4.2 chip with internal wifi antennas. The passive cooling system works perfectly because the Box hardly heats up. In the lower area, it has a reset button to reboot the system if it suffers a software catastrophe and to reset it.

After connecting the Mecool KM2 TV Box it boots automatically, we see the configuration wizard. Where we can set the Wi-Fi connection, define which apps will install by default, and select the type of content we want to see on the main screen. Once configured we get to the new Android TV launcher based on rows with tabs of the contents or shortcuts to the installed apps. By default, the system comes with some rows that you can disable and leave the environment quite clean. The overall performance is good, we can move smoothly and quickly between menus.

The Android TV-Box Mecool KM2 has installed 2 GB of RAM and for storage, we have 8 GB eMMC that we can expand with a USB memory. It has a USB 3.0 port for connecting external drives (read-only) or peripherals. In addition, it also has another extra USB 2.0. In the network section, we find a wireless adapter Wifi ac + Bluetooth 4.2. That as we can see in the tests the results are good. The internal memory is fast and helps us to use the system with no lag.

In the performance section, the Mecool KM2 has the Amlogic S905X2-B Quad-Core SoC with ARM Cortex-A53 processors up to 1.8GHz. As for the graphics section, it has a mid-range Mali-G31 MP2 GPU. As we can see in the results we have a pretty good performance. Moreover the latter exceeds some generic boxes. This hardware is matched against the Fire TV-Box 4K and the new Google cast TV, far exceeding the Xiaomi Mi Box which is already quite amortized. 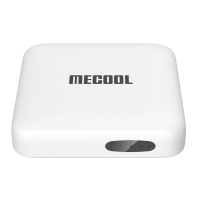 We track Mecool KM2 TV Box for you and email you once the product dropped below your desired price.
Price Alert