Product is rated as #68 in category Computers & Office
Recommended

For the current pace of life, we need a projector that we can connect and use with a cell phone or tablet. And the operation should support more efficient “human-machine interaction”, intelligent but not cumbersome, to improve efficiency. Today we bring you a smart WEJOY Y2Pro projector with an interactive touch function.

The WEJOY Y2Pro projector has a powerful intelligent function. The latter can not be separated from the projector’s hardware configuration. This projector runs Android 9, comes with 2GB memory and a 4-core chip.

The WEJOY Y2Pro projector includes an LCD projector with a resolution of 1920 × 1080 pixels. It also has a brightness of 100 ANSI Lumens and a maximum contrast of 1500:1.

Connections, Multimedia And Other Features

The connection interfaces of the WEJOY Y2 Pro are a USB 2.0 port, a 3.5 mm jack for analogue audio and video and an HDMI connector. It has a Rockchip RK3229 SoC, with four ARM Cortex-A7 cores capable of reaching up to 1.5GHz and a Mali-400mp2 GPU. It is capable of natively playing video up to 4K@60fps resolution. This equipment also features 1GB of DDR3 RAM and 16GB of eMMc storage memory. It also supports dual-band Wi-Fi, Bluetooth 4.0 and has two 3W speakers inside.

When we use the stylus to operate on the projected image, the projector will instantly process the signal from the stylus, including writing and drawing, playing games and other operations. So this isn’t just a projector, it’s a projector + smart TV for use.  It understands your office needs better than a smart TV and helps you make better work reports. When playing PPT, you no longer need to use the remote control or mouse to turn pages, just use a pen to turn pages instead of the mouse with a single click.

This projector supports wireless screencasting for Android, IOS, and Windows systems, and Mac users can connect via HDMI. It provides a physical resolution of 1920 x 1080. 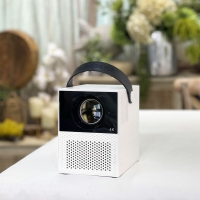 Gizcoupon review
The WEJOY Y2Pro is known for its portability and many useful features that you can find on premium projectors.
Brightness
5
Price
9.5
Projection
7
Interfaces
8.3
Hardware
5.8
PROS
CONS

We track Wejoy Y2Pro Projector for you and email you once the product dropped below your desired price.
Price Alert