Product is rated as #95 in category Computers & Office

The Creality Sermoon V1 Smart 3D printer contains several safety features. One of them is the full enclosure, which is perhaps the main reason that company aims to target a young audience with this model. The Sermoon V1 features built-in wireless networking and remote printing thanks to the Creality app. In addition, the app is in fact the Creality Cloud. The latter is the company’s repository and clout slider used with other Creality networking solutions such as Wi-Fi Box. It is also worth noting that the Creality Cloud makes the 3D printing process much simpler and easier. So, this can be a perfect opportunity to introduce 3D printing to a young audience.

In terms of features, the print volume of the V1 is 175 x 175 x 165mm. Moreover, it is slightly small than average. But it can become an advantage if you would like to save some space. On the other hand, the machine itself measures 400 x 380 x 430mm. The Creality Sermoon V1 also features enclosure LEDs. LEDs in fact are something very important and practical. In addition, it is also a good and necessary addition if you are introducing young kids to 3D printing.

One of the specifications that are definitely worth highlighting is the quiet operation. Generally, printers are not as loud as they were in the near past. However, the quiet operation has always been an important selling point of the printers. The company claims that they have received a third-party certification ensuring that the Sermoon V1 performs at just 45dB. In fact, it is a perfect volume for a home, office, or classroom.

We cannot fail to mention that other smart features of the printer are a camera and open-door detection. Thanks to the availability of the camera, the Cloud app gets a smart function in print monitoring. On the other hand, the open-door detection function simply pauses the printing process in case the door is opened. 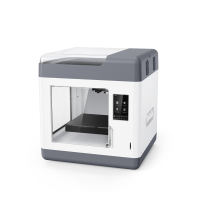 We track Creality 3D Sermoon V1 Smart 3D Printer for you and email you once the product dropped below your desired price.
Price Alert