Product is rated as #337 in category Computers & Office

In terms of design, the router from the Xiaomi brand has a white body and six antennas. As for the dimensions, it is 320 x 320 x 55 mm. According to the manufacturer, it weighs only 0,95 kg. The manufacturer also made its 6 antennas of phosphorous hole material.

Our protagonist sports a Mediatek MT7622B SoC, which uses dual-core Arm Cortex-A53 processors. The latter can clock at up to 1.36 GHz. It also has two NPU cores, which will help the chip do tasks faster and more effectively. The router will be able to automatically recognize the gaming mode of Xiaomi and Redmi phones for network acceleration. There is also 256 MB of RAM.

It is important to say that it features a Qualcomm six-core WiFi 6 chip with dual-band support (2.4GHz with 5GHz). You will be also able to connect up to 248 devices to the route at the same time.

The Redmi AX6S comes with a 2×2 antenna and will be able to reach a maximum speed of 800Mbps in the 2.4GHz band. As for the 5GHz band, it offers other independent 2×2 antennas, which will be able to reach up to 2402Mbps. Thanks to its six antennas, the coverage will increase by 50 percent. The device even offers OFDMA, MU-MIMO, BSS Coloring, Beamforming, IPv6 protocol, and WPA3 encryption.

One of the key features of this router is the rich set of various ports. Say, it comes with a Gigabit WAN port for the connection bridge with our router. There are also three Gigabit LAN distribution ports.
This router runs OpenWRT operating system with the corresponding MiWiFi layer. So you can access its settings through the Xiaomi app. 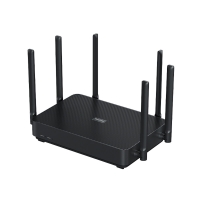 We track Xiaomi Redmi AX6S Router for you and email you once the product dropped below your desired price.
Price Alert