Product is rated as #35 in category Computers & Office

The first computer of the BlitzWolf has been released under the name BW-MPC1, which starts in the entry category, where its competitors are also real bargains and TV boxes. The construction is fine at first glance, and you can expect from the configuration what is in these irons. The BlitzWolf BW-MPC1 mini PC’s 13.9 x 13.9 x 3.9 cm case is the size of a butter box. It is small and consumes little, so not only can we save space with it; but it won’t significantly increase the cost of your electricity bill either. Another advantage of the small machine is that you can also install a 2.5-inch drive to add an SSD or even a multi-terabyte HDD to the internal drive to fit all your data on it.

The Intel Celeron J4125 is a two-year processor for the large chip maker and is mostly used in low-performance machines and NASs. The Chinese prefer to touch the type because it provides an extremely cheap base. The BlitzWolf BW-MPC1 has 8GB of LPDDR4 memory, along with 128GB of eMMC storage. It doesn’t have a dedicated graphics card, so you need to fit in with the integrated Intel UHD Graphics 600. But it can also handle extreme 4K content in extreme cases. Thanks to the processor, it can be used not only for downloading, at home or in small office work but also for watching YouTube videos and movies, in addition to consuming a wide range of content. It is already able to decode VP8, VP9, ​​H265 videos in hardware. In terms of performance, the Cinebench R15 also precedes an aging i3U processor.

We also got everything we needed from wireless connections. We also have Bluetooth 4.0 and 2.4G / 5GHz, 802.11 b / g / n / ac WiFi here. Also get a European standard adapter, HDMI, and SATA cable for the BlitzWolf BW-MPC1 mini PC. The machine is pre-installed with a genuine Windows 10 Pro operating system, but anything else can be put on it. The design is best imagined as a TV box or computer for users who don’t require performance and barely use their machine. 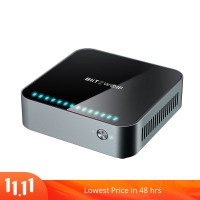 Gizcoupon Review
The BlitzWolf BW-MPC1 already has a 128GB drive and 8GB of DDR4 memory which will be enough for many things, but one of the most important components is the newer Intel® Celeron® J4215 processor, which is capable of a maximum of 2.7GHz.
Design
9
Features
9
Operation
9
Performance
8
PROS
CONS

We track BlitzWolf BW-MPC1 Mini PC for you and email you once the product dropped below your desired price.
Price Alert