The BMAX Y11 offers a different processor which makes the laptop stand out in the market. The Plus model is the more powerful version of its predecessor Y11. This is mainly due to the quad-core processor Intel N5100 upgraded CPU and 10nm process node. In addition, the frequency of the laptop differs in the range of 1.1Ghz to 2.8Ghz, at the same time giving smoother performances to improve efficiency.

Starting with the display, the BMAX Y11 adopts a small 11.6-inch laptop which is really a perfect size for traveling. In addition, the laptop supports a 360-degree rear-facing touchscreen. The latter gives an opportunity to use the laptop as a tablet as well. It also features a FullHD resolution IPS display, which is in fact touch-sensitive. Moreover, you can also fold it 360 degrees to the back of the laptop. On the other hand, perhaps the foldability allows you to use the device as a tablet. This is because the feature of folding makes it much easier to work. It is also worth noting that the Bmax Y11 has an al metal cover.

As for the hardware, the laptop sports the Intel Gemini Lake N5100 processor. This low-power processor includes four cores, with a base range of 1.1Ghz. However, it can also reach a peak speed of 2.8Ghz. Although the laptop is small in dimensions, it features a quite impressive and large storage space, as it has 8GB of LPDDR4 memory. At the same time, it comes with 256GB SSD native storage.

In terms of connectivity, this product supports dual-band WiFi of 2.4GHz and 5GHz as well as Bluetooth 5.0. Above the screen, we can find a 1MP camera, which is enough to provide acceptable video call quality. As for interfaces, there is a micro HDMI video output, power connector, MicroSD card reader, Type-C port, and MicroUSB port.

Next to the power on/off button, we can see the volume rocker as well as a 3.5mm audio jack.

For hardware and operations, the laptop comes with Windows 10 pre-installed. And finally, the BMAX Y11 Plus is powered by a 7000mAh battery. 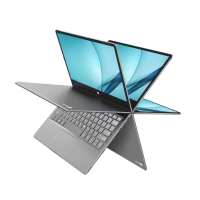 Gizcoupon Review
The functionality of the BMAX Y11 laptop can be seen as you can use it both as a laptop and tablet. The notebook features a powerful processor, battery, and connectivity, which will ensure a quite good working experience.
Operation
8.8
Performance
8.7
Material
8.8
Function
8.9
Hardware
9.4
PROS
CONS

We track Bmax Y11 for you and email you once the product dropped below your desired price.
Price Alert